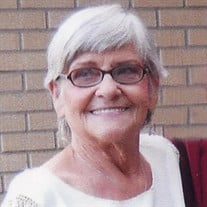 Funeral services for Helen Davison Baird will be 2:00 p.m. Monday, January 20, 2019, at the Waynoka First United Methodist Church with Pastor Wendie Jencks-Wilson officiating. Interment will be in the Waynoka Municipal Cemetery under the direction of Marshall Funeral Home of Waynoka, LLC. Helen Edna Baird, daughter of the late John and Nellie (Wylie) Houghton, 0was born October 5, 1932, at Quinlan, Oklahoma, and left this world to meet her Lord January 15, 2020, at Alva, Oklahoma, at the age of 87 years, 3 months, and 10 days. Helen started the first grade at Quinlan School and graduated from Quinlan High School with the Class of 1951. On May 25, 1952, she was united in marriage to Roy Harley Davison at Enid, Oklahoma. She worked at the Waynoka Telephone Office for 8 years. Her daughter, Denise, was a gift from God, bringing much joy to her mom through the years. Helen was a full time mother and homemaker until 1966 when Denise started the first grade. At that time she began working at the Clapper Hospital in many fields, which included Nurse's Aide, Ward Clerk, Medical Records Manager and assisting in surgery, working until the hospital closed in 1988. Her husband, Harley, passed away in 1990. Helen loved helping people and continued home health nursing until she was blessed with her grandson, Harley, in 1993, and cared for him while Denise worked at the Alva nursing home. She enjoyed each phase of his life and loved to play basketball with him. In 2001, a wonderful man came into Helen's life, and she and Rex Baird were united in marriage on September 1, 2001, in Waynoka and she enjoyed the blended family with his 3 children, Rex Ivan, Allen, and Sharon, and many grandchildren. They were all a blessing to Helen and she loved having them come over for a night or two. She became a member of the Methodist Church in Waynoka in 1953, and served in many ways as a Sunday School Teacher, Youth Leader and Nursery Attendant. Music was important in her life and she didn't care what church was having a meeting she went for the good songs. Among some of the "odd jobs" she did after retiring were Social Activities Director at the Waynoka Nursing Home and helping at the Northwest Treatment Center. She was a member of the Waynoka Legion Auxiliary, the Red Hat Girls, the Methodist Women's Group and the choir. She began working for Marshall Funeral Home in Waynoka in 2005 and worked until her health forced her to quit in 2018. She was preceded in death by her husband, Harley; her husband, Rex; her siblings, John Houghton, Betty Magee, and Norma Rockhold. Helen is survived by her daughter, Denise; her grandson, Harley; several nieces and nephews; other relatives and friends. Memorial contributions may be made in her memory to the funeral home.

Funeral services for Helen Davison Baird will be 2:00 p.m. Monday, January 20, 2019, at the Waynoka First United Methodist Church with Pastor Wendie Jencks-Wilson officiating. Interment will be in the Waynoka Municipal Cemetery under the direction... View Obituary & Service Information

The family of Helen Davison Baird created this Life Tributes page to make it easy to share your memories.

Funeral services for Helen Davison Baird will be 2:00 p.m. Monday,...

Send flowers to the Baird family.