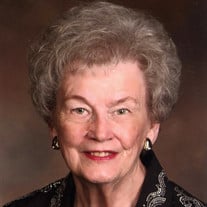 Funeral services for Helen Louise Thiesing will be 10:30 a.m. Wednesday, May 3, 2017, at the Zion Lutheran Church with Pastor Aaron Wagner officiating. Interment will be in the Zion Lutheran Cemetery under the direction of Marshall Funeral Home of Alva. Helen Louise Thiesing, daughter of the late Herbert Earnest and Agnes Louise Ida (Meyer) Petermann, was born March 8, 1930, just south of Alva in Woods County, Oklahoma, and passed away April 29, 2017, at Alva, Oklahoma, at the age of 87 years, 1 month, and 21 days. After Helen graduated from Alva High School, she attended Northwestern Oklahoma State University. She worked at Alva State Bank. On March 6, 1954, she was united in marriage to Kenneth Thiesing at Alva. Together they bought the John Deere dealership in 1963 and named it Tri-K Equipment. She worked at Tri-K until the dealership was sold in 2006. Helen was a member of the Zion Lutheran Church, Chapter ET P.E.O., Twentieth Century, the Holly Club, and the Household Executives. She also served on the Alva Educational Foundation and the NWOSU Foundation for many years. She was a big supporter of Alva Community Theater, Inc. and enjoyed many plays over the years, especially the ones with her grandkids great grandkids performing. She was the Oklahoma Heart of OHCE in 2001 and the AAUW Woman of Recognition in 2003. In 2010, she had honor of being the Parade Marshall at the NWOSU Homecoming Parade. Playing Bridge and Rummy were another favorite pastime for Helen. Besides her parents, she was preceded in death by her husband, Kenneth Thiesing. Helen is survived by two sons, Kevin Thiesing and wife, Jana, of Alva, and Kelly Thiesing and wife, Kellie, of Alva; one brother Herbert Petermann, Jr, of Caldwell, Kansas; one sister, Norma Jean Lowe and husband, Bill, of Holly, Colorado; four grandchildren, Kassy Yauk and husband, Evan, of Alva, Kaylee Ohm and husband, Tim, of Alva, April Fulgium and husband, James, of Wheatridge, Colorado, and Jensen Thiesing of Alva; eight great grandchildren, Hadlee, Kodee, and Telson Ohm, Eden Yauk, and Colton, Zayne, Skylar, and BrieAnn Fulgium; other relatives and many friends. Memorial contributions may be made through the funeral home to Alva Community Theater, Inc., the Alva Education Foundation, or the Zion Lutheran Cemetery Fund.

Funeral services for Helen Louise Thiesing will be 10:30 a.m. Wednesday, May 3, 2017, at the Zion Lutheran Church with Pastor Aaron Wagner officiating. Interment will be in the Zion Lutheran Cemetery under the direction of Marshall Funeral... View Obituary & Service Information

The family of Helen Louise Thiesing created this Life Tributes page to make it easy to share your memories.

Funeral services for Helen Louise Thiesing will be 10:30 a.m....

Send flowers to the Thiesing family.