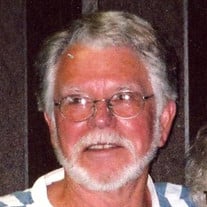 Funeral services for Howard Roberts will be 2:00 p.m., Tuesday, May 30, 2017, at the Marshall Funeral Home Chapel with Rev. Mark McDonald officiating. Interment will be in the Alva Municipal Cemetery under the direction of Marshall Funeral Home of Alva. Howard Orlando Roberts, son of the late Ralph W. and Margaret P. (Cox) Roberts, was born April 26, 1928, at his parent’s farm northwest of Capron, and passed away peacefully on May 23, 2017, at Oklahoma City, at the age of 89 years and 27 days. Howard went to Capron School all twelve years graduating in 1946. He enjoyed participating in baseball and basketball. After graduation he did farm work and then attended college before quitting to join the Navy in 1948, serving during the Korean conflict. Howard was honorably discharged in 1952. Shortly after his discharge, Howard met Fern Gum and they were married December 24, 1952. They soon moved to a farm at Yates Center, Kansas, where they raised their three boys. When he retired from farming, they moved into Yates Center and Howard began a profession of floor covering laying tile and carpeting. In 2004, Howard and Fern returned to their old hometown of Alva. Besides his parents, Ralph and Margaret, he was preceded in death by a son, Jay Mitchell (Mitch) Roberts; two brothers, Donald and John Roberts; and three sisters, Elaine Lattimer, Betty Langton, and Bonnie Ludlum. Howard is survived by his wife, Fern, of Alva; two sons Steve Roberts of Tecumseh, Kansas, and Jeff Roberts of Tulsa; one sister, Peggy Stanford and husband, Paul, of Enid; one brother, Larry Roberts of Alva; three grandchildren, Jon Roberts and Trisha of Lebanon, Oregon, Niki Stivers and husband, David, of Albuquerque, New Mexico, and their mother, Susan Roberts of Kansas, and Michael Roberts of Boise, Idaho; one great grandchild, Corbin; many nieces, nephews, other relatives and friends. Howard will be remembered for his friendliness, love of family, and his hard work ethic. Memorial contributions may be made through the funeral home to the charity of your choice in Howard’s memory.

Funeral services for Howard Roberts will be 2:00 p.m., Tuesday, May 30, 2017, at the Marshall Funeral Home Chapel with Rev. Mark McDonald officiating. Interment will be in the Alva Municipal Cemetery under the direction of Marshall Funeral Home... View Obituary & Service Information

The family of Howard O. Roberts created this Life Tributes page to make it easy to share your memories.

Send flowers to the Roberts family.