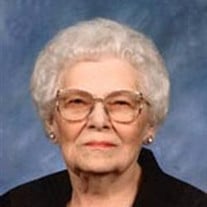 Funeral services for Iola G. Wilson will be 2:00 p.m. Tuesday, May 11, 2010, at the First United Methodist Church with Rev. Terry Martindale officiating. After the service, she will be cremated at her request. Arrangements are under the direction of Marshall Funeral Home of Alva. Iola G. Wilson, daughter of the late Owen Earl and Alice (Watson) Ricks, was born September 27, 1916, at Manchester, Oklahoma, and passed away May 7, 2010, at Share Convalescent Home in Alva, Oklahoma, at the age of 93 years, 7 months and 10 days. After Iola graduated from Driftwood High School, she attended Northwestern Oklahoma State College and received a Bachelor?s degree in Art and Music in 1940. She then attended the University of Oklahoma and completed two years of graduate work in Piano and Organ. Iola taught music and art for a year at Beaver, Oklahoma, before moving to Wichita, Kansas, to work at Boeing during the war. Later she moved to Washington, D.C. and was a decorator and window trimmer for Hecht Department Store. In May of 1947, she was united in marriage to Kenneth Wilson at Cherokee, Oklahoma. To this union two children were born: Allen and Janice. They made their home in Alva where they farmed and ranched and where she lived the remainder of her life. After Kenneth passed away January 7, 1982, she later married Athol Brunk in May of 1983. They lived in Alva until his death in 1989. Iola was a member of the First United Methodist Church and the United Methodist Women. She was also a member of the Twentieth Century Club, Nescatunga Arts and Humanities, the Household Executives, and the American Legion Auxiliary. She was a past member of the Alpha Sigma Alpha Sorority. Besides her parents, Iola was preceded in death by her husbands, Kenneth Wilson and Athol Brunk. Iola is survived by her son, Allen Wilson and wife, Carolyn, of Alva; her daughter, Janice Hornbostel and husband, Bill, of Colorado Springs, Colorado; four stepchildren, Leo Brunk and his wife, Eileen, of Nausha, New Hampshire, Larry Brunk and his wife, Corliss, of Paso Robles, California, Barbara Jackson and husband, Glenn, of Manhattan Beach, California, and Mary Love and husband, Bill, of Maude, Oklahoma. Also surviving are six grandchildren, Bennett Hornbostel of Seattle, Washington, Kaitlin Hornbostel of Denver, Colorado, Jennifer Jayroe and husband, Clint, of Oklahoma City, Keri Kalka of Oklahoma City, Susan Strong and husband, Lt. Col. Charles G. Strong, Jr. of Colorado Springs, Colorado, and Larry Kalka and wife, Veronica, of Minneapolis, Minnesota; two great grandchildren, Grant Strong of Colorado Springs, Colorado, and Sienna Kalka of Minneapolis, Minnesota; other relatives and friends. Memorial contributions may be made through the funeral home to the Share Hospice, the First United Methodist Church, the Senior Citizen?s Center, or the Nescatunga Arts Council.

Funeral services for Iola G. Wilson will be 2:00 p.m. Tuesday, May 11, 2010, at the First United Methodist Church with Rev. Terry Martindale officiating. After the service, she will be cremated at her request. Arrangements are under the direction... View Obituary & Service Information

The family of Iola G. Wilson created this Life Tributes page to make it easy to share your memories.