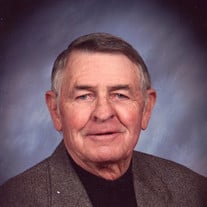 Memorial services for Irvin Walter Ritter will be 2:00 p.m. Friday, September 21, 2018, at the Alva First Christian Church (Disciples of Christ) with Pastor Ron Pingelton officiating. Arrangements are under the direction of Marshall Funeral Home of Alva. Irvin Walter, son of Anna Mae Graff and Walter Fredrick Ritter, was born in Alva, Oklahoma, on April 14, 1934. He grew up on the family farm and graduated from Alva High School in May of 1952. Irvin attended Oklahoma State University where he ran track and graduated in 1956 with a bachelor of science degree in agriculture. He then returned to Alva where he began his career in farming and ranching. He married Kay Johnson of Alva on June 2, 1956. To their marriage two daughters were born, Tanya and Jil. Irvin was a member of the First Christian Church Disciples of Christ in Alva. He was also a member of the Oklahoma Wheat Commission, a pilot, and an avid sportsman who enjoyed the outdoors. He loved to golf, hunt, fish, snow ski, and followed any and all OSU sports. He was a genuine Cowboy through and through. Irvin was preceded in death by his parents, Walter and Anna Mae Ritter, and brother, Max Ritter. He is survived by his wife, Kay, of 62 years, and two daughters: Tanya Griggs and husband Bob of Edmond, and Jil Koppitz and husband Marty of Alva. He is also survived and adored by his grandchildren and great-grandchildren: Katie Jones and husband Will of Tulsa, Chase Griggs and fiance Madeline Hamm of Oklahoma City, Tanner Wamsley and fiancé John Gage of Stillwater, Cole Koppitz of Alva, Blake Koppitz of Alva, Nikki Griggs of Oklahoma City, Kelly Griggs and wife Tara and two children, Arden and Brogan of Edmond. In lieu of flowers, the family requests that memorials be made through the funeral home to the First Christian Church Disciples of Alva or Northwestern Oklahoma State University.

The family of Irvin Walter Ritter created this Life Tributes page to make it easy to share your memories.

Memorial services for Irvin Walter Ritter will be 2:00 p.m. Friday,...

Send flowers to the Ritter family.