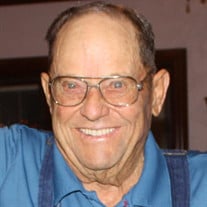 Graveside services for Ivan Dale Zook will be 10:00 a.m. Monday, June 29, 2020, at the Waynoka Municipal Cemetery with Bill David Walker officiating. Interment is under the direction of Marshall Funeral Home of Waynoka, LLC. Viewing will be at the funeral home from 1:00 to 7:00 p.m. Sunday. Ivan Dale Zook, son of the late Harry Lester and Nettie Irene (McCully) Zook, was born February 10, 1932, southeast of Waynoka on the family farm in Woods County, Oklahoma, and passed away June 26, 2020, at Alva, Oklahoma, at the age of 88 years, 4 months, and 16 days. Ivan attended Walnut Grove Schools and Waynoka High School, graduating with the Class of 1949. He began working on the family farm at a very young age and after graduation he began a 30 year career with the Santa Fe Railroad while continuing to work on the farm. In 1952, Ivan was drafted into the United States Army and served his time in many different places, including Hammelburg, Germany. He was honorably discharged in 1954 and gladly returned to his home near Waynoka. On March 20, 1958, Ivan married BernaDean Seaman James in Raton, New Mexico. They lived on a farm east of Waynoka for most of their married life. Ivan spent his days off from the railroad working on the farm. He loved to be on the tractor or the combine. He was not one to go to many activities, but loved to visit with his neighbors when they would meet out on the road going from one field to the next. Anyone who spent much time with Ivan would earn a nickname, whether they knew it or not. He also found great joy spending time and teasing his grandkids and great grandkids. Besides his parents, he was preceded in death by his wife, BernaDean; one son, Ken James; three brothers, Harry (Dean) Zook, Francis (Tub) Zook, and Devere Zook; and one sister, Lois Ralston. Ivan is survived by one daughter and two sons, Dannel Pfleider and husband, Mike, of Alva, Dale Zook and wife, Mindy, of Waynoka, and John James and wife, Saundra, of Wellington, Texas; ten grandchildren; thirteen great grandchildren (with 2 more on the way); and four great-great-grandchildren. He is also survived by one sister, Linda Olson of Amorita, Oklahoma; numerous nieces and nephews; other relatives and friends. Memorial contributions may be made through the funeral home to the Waynoka Historical Society.

Graveside services for Ivan Dale Zook will be 10:00 a.m. Monday, June 29, 2020, at the Waynoka Municipal Cemetery with Bill David Walker officiating. Interment is under the direction of Marshall Funeral Home of Waynoka, LLC. Viewing will be... View Obituary & Service Information

The family of Ivan Dale Zook created this Life Tributes page to make it easy to share your memories.