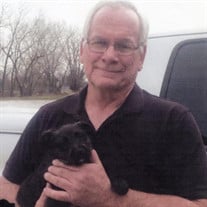 Jack Lee Sims, son of the late Arnold Nathaniel and Leona Juanita (Rawson) Sims, was born June 21, 1954, at Waynoka, and passed away August 10, 2021, at Alva, at the age of 67 years, 1 month, and 20 days. No services are planned at this time for Jack. He was cremated under the direction of Marshall Funeral Home of Alva. Jack attended school in Avard and later graduated from Waynoka High School. He was united in marriage to Patricia Carol Roberts on September 2, 1978. They lived in the Woods County area for 43 years, the last 20+ years in Alva. Jack worked for several oil companies for about eight years before going to work for Washburn Motor Company. He was trained as a mechanic and spent his career working for Lyle, Kirk, and Cory at Washburn Motor Company until his retirement. Jack enjoyed his Harley motorcycle and was an animal lover. He also enjoyed mowing and keeping the town of Avard well kept. Besides his parents, he was preceded in death by a daughter, Robin Sims; a son, Denzel Burton, Jr.; and a brother, Gary Sims. Jack is survived by his wife, Patti, of Alva; two daughters, Pamela Cherry and husband, Robert, of Virginia Beach, Virginia, and Paula Johnson of Long Beach, California; three brothers, Max Sims of Carmen, Ronnie Seaman of Austin, Texas, and Keith Sims and wife, Sylvia, of Amarillo, Texas; three grandchildren; three great grandchildren; other relatives and friends. Memorial contributions may be made through the funeral home to Share Hospital.

The family of Jack Lee Sims created this Life Tributes page to make it easy to share your memories.

Send flowers to the Sims family.