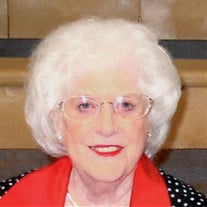 Funeral services for Jacqueline Leeper will be 11:00 a.m. Thursday, June 20, 2019, at the First Christian Church (Disciples of Christ) with Pastor Ron Pingelton officiating. Private family interment will be prior to the service in the Alva Municipal Cemetery under the direction of Marshall Funeral Home of Alva. Jacqueline Leeper, daughter of the late Francis Albert and Veda Geraldine (Johnson) Nugent, was born January 27, 1927, Medford, Oklahoma, and passed away June 16, 2019, in Alva, Oklahoma, at the age of 92 years, 4 months, and 19 days. Jackie moved to Alva at an early age and graduated from Alva High School. She worked in her father’s abstract office while attending Northwestern Oklahoma State University. While at NWOSU, she joined the Pi Kappa Sigma Sorority, which later merged with Sigma Kappa and served as President. On November 15, 1947, she was united in marriage to Calvin Wayne Leeper at Alva and they shared nearly 70 years together. She and Calvin farmed and ranched in the Dacoma area. She was an active member of the First Christian Church (Disciples of Christ), where she served as an Elder, and Past President of C.W.F. She was also a member of the 20th Century Club and Chapter AL of PEO. As an active NWOSU supporter, she served as chairman of the Scholarship Drive. She was very active in the Democrat Party, serving as Chair of the Woods County Democrats, on the National Platform Committee, President of Democratic Women,and Inspector on local Elections. She just retired from several years of service on the Northwest Family Service Board and was a member of the VFW Ladies Auxiliary. She also volunteered with the Oklahoma Blood Institute. Besides her parents, she was preceded in death by her husband, Calvin. Jacqueline is survived by three children, Linda Leist and husband, George, of Alva, Lee Leeper and wife, Tracie, of Alva, and Jay Leeper and wife, Terri, of Alva; and one sister, Sandra Hall and husband, Elston, of Colleyville, Texas. Also surviving are seven grandchildren, Lee Ann Leist and fiancé, Lonn Reutlinger, of Freedom, Shannon Frazier and husband, Jason, of Enid, Carly Williams and husband, Cody, of Tulsa, Cale Leeper and wife, Cinthia, of Dacoma, Candice Holley and husband, Cameron, of Tulsa, Kate and Kayla Leeper of Alva; seven great grandchildren, Makena Sherrell of Oklahoma City, Aaliyah and Aaron Frazier of Enid, Harper and Vivian Williams of Tulsa, and Gabby and Amelia Leeper of Dacoma; other relatives and friends. In lieu of flowers, memorial contributions may be made through the funeral home to Beadles Nursing Home Activity Fund or the First Christian Church Building Fund.

Funeral services for Jacqueline Leeper will be 11:00 a.m. Thursday, June 20, 2019, at the First Christian Church (Disciples of Christ) with Pastor Ron Pingelton officiating. Private family interment will be prior to the service in the Alva... View Obituary & Service Information

The family of Jacqueline L. Leeper created this Life Tributes page to make it easy to share your memories.

Funeral services for Jacqueline Leeper will be 11:00 a.m. Thursday,...

Send flowers to the Leeper family.