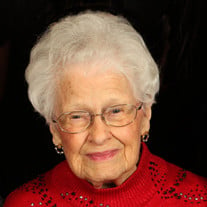 Memorial services for Jadeena Brown will be 1:30 p.m. Saturday, December 1, 2018, at the First United Methodist Church with Rev. Dr. Carol Cook Moore officiating. A private family burial will be prior to the service under the direction of Marshall Funeral Home of Alva. Jadeena Pearl Leeper Brown, daughter of the late Jay W. and Leona (Crowder) Leeper, was born December 20, 1916, on the Leeper family farm east of Dacoma, Oklahoma, and passed away November 27, 2018, at Alva, at the age of 101 years, 11 months, and 7 days. She attended Mount Zion and Union Center Grade schools and graduated from Dacoma High School in 1935. She attended Northwestern Teacher’s College where she was a member of Alpha Sigma Alpha Sorority and graduated in 1941. During her college years, one cherished memory was serving dinner to Mrs. Eleanor Roosevelt who visited the campus in 1939 to dedicate Jesse Dunn Hall. While at Northwestern, Jadeena met and then married Durward Brown on September 17, 1938, at the Methodist parsonage in Waynoka. Their love story continued for over 66 years. After graduation, she and Durward taught at Greenfield, Oklahoma, then moved to Cherokee where she was employed as a teacher in a one-room school near Stella, Oklahoma. The school had no electricity and she was not only teacher but also janitor and cook. She continued her teaching career for twenty more years in Waynoka and Alva. Jadeena, along with husband Durward, were founding members of the Homebuilder’s Sunday School class at the First Methodist Church in Alva. She was also a member of United Methodist Women Mary Martha Circle and the DoLittle Camping Club. Jadeena and Durward enjoyed showing antique cars and made many trips to car shows and flea markets in Oklahoma, Kansas, and Texas. Jadeena loved to cook and host her family for holiday gatherings. They always looked forward to her specialty, Sour Cream Twists. Besides her parents, Jay and Leona Leeper, she was preceded in death by her husband, Durward, her sister, Leota Keltner, and her brother, Calvin Leeper. Jadeena is survived by her daughter, Melba Richey and husband, Jim, of Alva; her grandson, Steve Richey and wife, Lori, of Wichita, Kansas; her granddaughter, Stephanie Coon and husband, Robert, of Tulsa; her sister-in-law, Jackie Leeper of Alva; six great grandchildren; many special nieces and nephews; other relatives and friends. Memorial contributions may be made through the funeral home to the First United Methodist Church.

Memorial services for Jadeena Brown will be 1:30 p.m. Saturday, December 1, 2018, at the First United Methodist Church with Rev. Dr. Carol Cook Moore officiating. A private family burial will be prior to the service under the direction of Marshall... View Obituary & Service Information

The family of Jadeena Leeper Brown created this Life Tributes page to make it easy to share your memories.

Memorial services for Jadeena Brown will be 1:30 p.m. Saturday,...

Send flowers to the Brown family.