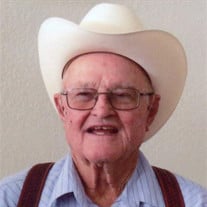 Funeral services for Jakie Lee Zook will be 2:00 p.m. Thursday, April 4, 2019, at the New Song Church with Pastor Jeremy Coolley officiating. Interment will be in the Waynoka Municipal Cemetery under the direction of Marshall Funeral Home of Waynoka, LLC. Jakie Lee Zook, son of the late Ralph Leroy and Flora Ruth (Nauerth) Zook, was born September 13, 1936, near Waynoka, Oklahoma, and passed away March 31, 2019, at Waynoka, at the age of 82 years, 6 months, and 18 days. Jakie graduated from Waynoka High School and attended Okmulgee Tech to study diesel mechanics. On March 28, 1958, he was united in marriage to Cleta Belle Paris in Waynoka. He served a term in the United States Army, spending 14 months in Germany. He returned to Waynoka where he farmed and worked in the oilfield, then owned and operated J & C Readymix, and Zook Oil Company. In 1986, he went to work as a landman, mainly for Koch Industries, until he retired in 2005. He accepted Jesus Christ and was baptized as a teenager and they attended the New Song Church. He was a member of American Legion. He enjoyed fishing and traveling around the country in his RV. Besides his parents, he was preceded in death by one brother, Kenneth Zook. Jakie is survived by his wife of 61 years and 3 days, Cleta Belle, of Waynoka; one son, Larry Zook and wife, Linda, of Waynoka; one daughter, Lynetta Braun and husband, Bill, of Hobart; one brother, Harley Zook and wife, Wanda, of Waynoka; two sisters, Eileen Parks and husband, Jim, of Oklahoma City, and Janetta Miller and husband, Jack, of Guthrie; six grandchildren, Jacob Gamble and wife, Kelly, of Decatur, Texas, Caleb Zook and wife, Machelle, of Waynoka, Russell Zook and wife, Dana, of Kingfisher, and Mary Belle Godwin and husband, Billy, of Midwest City, Mathew Braun of Hobart, and Jessica Braun of Weatherford; seven great grandchildren, Madison Gamble, Kennedy, Kade, and Norah Zook, and Alanna, Katie and Joey Salvato; other relatives, and many friends. Memorial contributions may be made through the funeral home to the Waynoka Fireman's Fund.

Funeral services for Jakie Lee Zook will be 2:00 p.m. Thursday, April 4, 2019, at the New Song Church with Pastor Jeremy Coolley officiating. Interment will be in the Waynoka Municipal Cemetery under the direction of Marshall Funeral Home of... View Obituary & Service Information

The family of Jakie Lee Zook created this Life Tributes page to make it easy to share your memories.