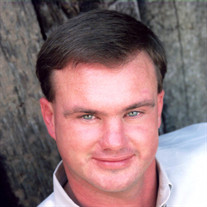 Funeral services for James Thomas Erikson will be 2:00 p.m. Saturday, September 3, 2016, at the Cedar Grove Wesleyan Church with Rev. Harold Henson officiating. Interment will be in the Alva Municipal Cemetery under the direction of Marshall Funeral Home of Alva. James Thomas “Tom” Erikson, son of Russell H. and Linda D. (Choplin) Erikson, was born August 21, 1971, at Alva, and passed away at his home on August 27, 2016, at the age of 45 years and 6 days. Tom was raised in Alva and graduated from Alva High School with the class of 1989. He was active in the Alva FFA showing hogs and cattle and won the State FFA Award. In 1989, he joined the Oklahoma High School Rodeo Association riding bareback broncs and placed in the top 15 in the state that year. After that, he started riding bulls, riding in numerous rodeos and jackpot bull riding. He placed in a number of rodeos and won several buckles. He attended Connors State College in Warner, Oklahoma, for 1½ years, majoring in equine. Tom worked with Jerry Nine at Woodward Livestock Company for several years, returning to Alva to work on the farm with his father. He attended the Cedar Grove Wesleyan Church. Tom loved his horses and taking care of his cattle. Besides both sets of grandparents, Howard and Doris Erikson and Doyel and June Choplin, he was preceded in death by two uncles, Lloyd Erikson and Stanley Erikson; and one aunt Shirley (Erikson) Bull. Tom is survived by his parents, Russell and Linda Erikson of Alva; one brother, Howard Clint Erikson and his wife, Amy, of Capron; one sister, Mandy Clepper and her husband, Jay, of Alva; two nephews, Ruston Erikson and Trenton Clepper; two nieces, Tanith Erikson and Bailey Clepper; other relatives and friends. Memorial contributions may be made through the funeral home to the Alva FFA or the Cedar Grove Wesleyan Church. DIRECTIONS TO CEDAR GROVE WESLEYAN CHURCH: From Alva, go west 7 miles to the CR 370 (Avard turnoff), go north 10 miles to the correction line (Major Road), then go west 2 miles. Google maps does not locate the church by the address, but it will using the name of the church.

Funeral services for James Thomas Erikson will be 2:00 p.m. Saturday, September 3, 2016, at the Cedar Grove Wesleyan Church with Rev. Harold Henson officiating. Interment will be in the Alva Municipal Cemetery under the direction of Marshall... View Obituary & Service Information

The family of James Thomas Erikson created this Life Tributes page to make it easy to share your memories.

Funeral services for James Thomas Erikson will be 2:00 p.m. Saturday,...

Send flowers to the Erikson family.