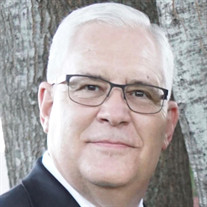 James Wesley Jones (Jay), 65, was born May 28, 1955 in Bartlesville, Oklahoma, and moved into Heaven on November 18, 2020, following a heroic battle with Covid-19. In 1979, Jay began his career in appraising and then evolved to commercial real estate lending through several bank transitions including First National Bank and First Interstate & Boatman’s. In 1997 he became VP of Finance at Oklahoma Christian University. He also served in other roles including as VP & CEO for the Tealridge Community. His compassion for coworkers made him unique as he truly loved his people wherever he was. He always looked for opportunities as a Godly servant to help those around him or anyone in need. Jay was married to Montine (Seikel) in 1989 and made a loving home for Jay’s children, Jake & Grace, and for Montine’s daughter, Michele. Soon their family was completed with the arrival of son, Ryan. Jay was the spiritual leader, the rock for the family, and immensely proud of his family. The family was active in the South Yukon Church of Christ and later in the Memorial Road Church of Christ. Their kids are very blessed to live near one another and enjoy spending time together raising the next generation of the Jones family. Jay relished the opportunity to love his grandbabies daily. He is preceded in death by his father Casey Jones. He is survived by his mother, Dorothy Jones, and his brother, Kirby Jones. He is also survived by his wife, Montine, and children Jake Jones and his wife Becca; Grace Mercer and her husband Mark; Michele Kelsey and her husband Bryan; and Ryan Jones and his wife India. Jay was immensely proud of his 9 grandchildren: Finley, Cooper, Ryker, Scout, Sawyer, Ike, Elliot, Hobie, and Blaise. An outdoor celebration of Jay’s life will be held Saturday, November 21, 3:30 pm at McGraw Pavilion on the campus of Oklahoma Christian University. Final interment and viewing will take place in Waynoka, Oklahoma on Saturday, November 21 at 10:30 a.m. Interment is under the direction of Marshall Funeral Home of Alva. Social distancing and masks required at both services. Please feel welcome to bring blankets and chairs. In memory, donations may be made to: Memorial Road Church of Christ Missions or Reba’s Ranch House in Denison, Texas.

James Wesley Jones (Jay), 65, was born May 28, 1955 in Bartlesville, Oklahoma, and moved into Heaven on November 18, 2020, following a heroic battle with Covid-19. In 1979, Jay began his career in appraising and then evolved to commercial... View Obituary & Service Information

The family of James Wesley "Jay" Jones created this Life Tributes page to make it easy to share your memories.

Send flowers to the Jones family.