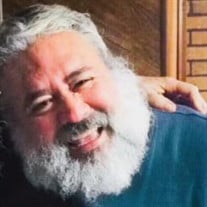 Funeral services for James Lewis “Jim” Jones will be Tuesday, February 9, 2021 at 1:00pm at the Waynoka School Multi-purpose Building with Karsten Longhurst and Bradlee Hadsell officiating. Interment will be in the Waynoka Municipal Cemetery under the direction of Marshall Funeral Home of Waynoka. Masks are suggested at the service. The service will be live streamed on the Marshall Funeral Home Facebook page. There will be a visitation with the family Monday at Marshall Funeral Home in Alva from 5:00pm to 7:00pm. James Lewis “Jim” Jones, son of Ted Dean Jones and the late Mary Kaaloa (Kekauoha) Jones, was born December 23, 1966 in Waynoka, Oklahoma, and passed away January 29, 2021, in Waynoka, Oklahoma, at the age of 54 years, 1 month, and 6 days. Jim graduated from Alva High School. He was an avid antique collector in Alva, then opened an antique store in Waynoka about 10 years ago. The more rusty the find, the more he loved the piece. He enjoyed fishing and spending time with his dad, as well as family and friends. Jim was full of life, always smiling and laughing and he never met a stranger. It didn’t matter what kind of day a person was having or how he was feeling, Jim always made it his mission to make them smile. Jim’s laugh was contagious and could be picked out of a crowd. Jim loved his dogs and his goat. He loved Western Cowboys and their history. He was preceded in death by his companion of 10 years Mylinda Walker; and his mother, Mary Jones. Jim is survived by one son, Jack Jones and wife, Amanda, of Alva; one daughter Jamie McAlister and husband, Josh, of Helena; his father, Teddy Jones of Alva; three brothers, Teddy Jones of Beatrice, Nebraska, Sam Jones and wife, Tamara, of Alva, and William “Bill” Jones and wife, Jody, of Arizona; four grandchildren, Morgann, Addisann, Breckyn, and Riecyn, all of Alva; other relatives and many friends. A love fund has been established at Corebank in Waynoka and BancCentral in Alva.

Funeral services for James Lewis &#8220;Jim&#8221; Jones will be Tuesday, February 9, 2021 at 1:00pm at the Waynoka School Multi-purpose Building with Karsten Longhurst and Bradlee Hadsell officiating. Interment will be in the Waynoka Municipal... View Obituary & Service Information

Funeral services for James Lewis “Jim” Jones will be Tuesday,...

Send flowers to the Jones family.