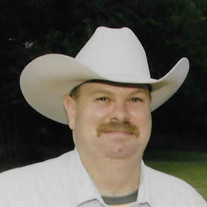 Graveside services for James Clayton McCarter will be 2:00 p.m. Thursday, November 14, 2019, at the Memorial Hill Cemetery with Rev. Chris Ruwaldt officiating. Interment is under the direction of Marshall Funeral home of Alva. James Clayton McCarter, son of the late Kenneth James and Lawana Sue (Hill) McCarter, was born December 21, 1967, in Corsicana, Texas and passed away November 9, 2019, at Oklahoma City, Oklahoma, at the age of 51 years, 10 months, and 19 days. James attended several schools and graduated from high school in Kerns, Texas. He moved to Alva in 2004 and worked at Alva’s Market as long as his health permitted. James had such a sweet soul. Many remember James as the friendly guy who was eager to help carry your groceries to the car for you. James loved old western movies, one of his favorite actors was John Wayne. James loved wildlife, drawing, and collecting knives. He also loved playing video games in his spare time. James is survived by his sister, Melissa Watkins and husband, Steve, of Clovis, New Mexico; three nieces, Mandy Wardlaw and husband, Brock, of Tuttle, Oklahoma, Ashley Clark and husband, Andrew, of Andover, Kansas, and Melanie Brittenum of Clovis, New Mexico; two nephews, Jarrod Watkins and Steven Watkins of Clovis, New Mexico; his brother-in-law, Jeremy Johnson and his mother, Kim Johnson, both of Alva; other relatives and friends. Besides his parents, he was preceded in death by his sister, Misty Johnson. Memorial contributions may be made to the funeral home.

The family of James Clayton McCarter created this Life Tributes page to make it easy to share your memories.

Graveside services for James Clayton McCarter will be 2:00 p.m....

Send flowers to the McCarter family.