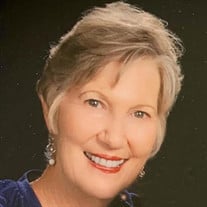 Funeral services for Janis Grace Schupbach will be 2:00 p.m. Wednesday, August 4, 2021, at the Zion Lutheran Church with Pastor Tim Roggow officiating. Interment will be in the Zion Lutheran Cemetery under the direction of Marshall Funeral Home of Alva. Janis Grace Russell Schupbach, the only child of David Wesley and Arvilla Grace Shenbeck Russell was born in Tulsa, Oklahoma December 26, 1944. Janis died peacefully on July 28 at Iris Memory Care in Edmond Ok at the age of 76. Janis attended Aline Public Schools and was one of thirteen graduates. She played basketball however her senior year she was named Ms. Aline and competed in the Cinderella pagent at NWOSU in 1962. After graduating high school she attended Oklahoma State University where she met the love of her life when catching a ride home to Aline for the weekend. Louis and Janis were united in marriage September 26, 1965. They moved west of Alva to the family farm where they built their home and life together raising three children. Janis transferred to NWOSU and finished her bachelors degree in Sociology. Janis was a homemaker in every sense. She enjoyed cooking, baking, gardening, sewing and walking the country roads with her good neighbor and friend, Ann Shirley. When she became pregnant she taught herself to sew. Even though Janis could play the piano, she loved listening to her husband play and always accompanied him when he performed at various functions. Louis and Janis traveled with their good friends, Lee and Sharon Smith, attended OSU football games and their kids activities. She was active in the Zion Lutheran Church, Ruth Circle and was one of the founding ladies to organize the annual Chicken Noodle Supper. She played in the Bell Choir for many years, a monthly bridge club, and PEO. Janis also helped many years at the Nescatunga Arts Festival Food booth making delicious crepes with her good friend Betty Jo Bellah. After Louis' death in 2014, Janis continued to live on the farm until eventually moving to The Homestead Retirement, then to Iris Memory Care in Edmond. Janis is proceeded in death by her husband Louis, and her parents. She is survived by her three children, JP and Joelle Randall of Alva, Kyle and Gina Vandruff of Cashion, and Ryan and Nhi Schupbach of Arcadia; six grandchildren, Whitney and Phillip Randall, Austin and Jackson Vandruff, and Aiden and Liam Schupbach; brother-in-law and sister-in-law, Darrell and Suzanne Pralle of Enid, of whom Suzanne was always considered a wonderful sister she never had. Memorial Contributions can be made to NWOSU Foundation, the Homestead Retirement Activities Fund or Zion Lutheran Church (Ruth Circle).

Funeral services for Janis Grace Schupbach will be 2:00 p.m. Wednesday, August 4, 2021, at the Zion Lutheran Church with Pastor Tim Roggow officiating. Interment will be in the Zion Lutheran Cemetery under the direction of Marshall Funeral... View Obituary & Service Information

Funeral services for Janis Grace Schupbach will be 2:00 p.m....

Send flowers to the Schupbach family.