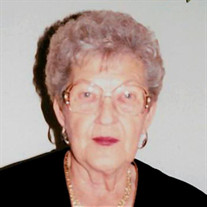 Jeanette Eyvonne Detwiler was born on September 4, 1927, near Carmen, Oklahoma, to the late Florence (Haltom) and Albert “Hap” Pearson and passed away May 19, 2016, at Alva, Oklahoma, at the age of 88. Jeanette’s wish was to be cremated and there is no service planned. Arrangements are under the direction of Marshall Funeral Home of Alva. On March 22, 1983, Jeanette was united in marriage to Stanley Warren Detwiler at the Chapel of the Fountain in Las Vegas, New Mexico. They made their home in Yucaipa, California, until 1991 when they moved to Alva. She worked with the Retail Clerks Union until her retirement. She was preceded in death by her parents, her loving husband, Stan Detwiler, a granddaughter, Kristin Hall, her son, Bill Hall and a brother, Leon Pearson. Jeanette is survived by two daughters, Marylin and Renee, and a daughter-in-law, Barbara Hall. She is also survived by two brothers, Darrel Pearson and Larry Pearson, and his wife, Sonya, as well as 6 grandchildren, 15 great-grandchildren, 1 great great-grandchild, many nieces and nephews, and many cousins, other relatives and friends.

The family of Jeanette Evyonne Detwiler created this Life Tributes page to make it easy to share your memories.

Jeanette Eyvonne Detwiler was born on September 4, 1927, near...

Send flowers to the Detwiler family.