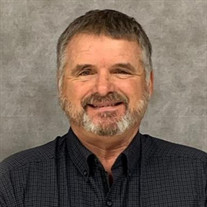 Jeffery Eugene Koehn, son of the late Robert Eugene and Lorene Adell (Wilcox) Koehn, was born April 10, 1961, in Enid, Oklahoma, and passed away August 24, 2021, in Oklahoma City, Oklahoma, at the age of 60 years, 4 months, and 14 days. Jeff graduated from Kremlin-Hillsdale Highschool in 1979. On May 29, 1982, he was united in marriage to Sandra Jean Ray at Seiling. They moved to Alva in 1984 where he started working at Long Gas Company. He bought Long Gas Company in 2012 and operated it until his death. He was a member of the Alva First Christian Church (Disciples of Christ) and the Alva Golf and Country Club. He enjoyed playing golf, hunting, and fishing. He always valued spending time with his family. Besides his parents, he was preceded in death by one sister, Cynthia White. Jeff is survived by his wife, Sandra, of Alva; one daughter, Jaisha, of Stillwater; one son, Jordan Koehn and fiance’, Britney, of Alva; three brothers, Patrick Koehn and wife, Dee, and children Cassidy and Gage, of Warr Acres, Frederick Koehn and wife Shelly, and children, Cody and Casey, of Anthony, Kansas, and Matthew Koehn and wife, Shannon, and children, Jenna, Kaitlyn, and Madeline, of Broken Arrow; three grandchildren, Taylynn Shepard of Helena, Alden and ConLee Baker of Alva; nephew, Jon and wife Stephanie White, of Oklahoma City; father-in-law, Stewart Ray; sisters-in-law, Bryce and Sherrie Benson of Alva, and their children, Sherryce and (Tyler) Pinon, of Castle Rock, Colorado, and Chrystal and (Tyler) Detring and their children, Liam and Maverick, of Bixby, Israel and Shelly Palacios and their children, Adrian and Issac, of Sharon, Jesse and (Maegann) Palacios and their children, Wrigley and Sawyer, of Chester, and Brent Palacios, of Ponca City; other relatives and many friends. In lieu of flowers, memorial contributions may be made through the funeral home to the Alva Municipal Cemetery or the Alva First Christian Church (Disciples of Christ) quilting ministry. We request that everyone wear masks for the church service because we do not want anyone else to feel our loss.

Send flowers to the Koehn family.