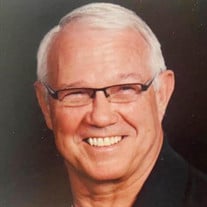 Jerry Lynn Garrison, son of the late Geral Dee and Velma Marie (Wright) Garrison, was born February 5, 1947, in Canadian, Texas, and passed away September 17, 2021, in Alva, Oklahoma, at the age of 74 years. There are no services planned at this time. Jerry graduated from Pampa (Texas) High School in 1965. He then received his Bachelor’s Degree from NWOSU in 1969. After graduation Jerry worked for a finance company in Pampa, Texas and then moved to Dallas to work for Chrysler Credit Corporation. Through a mutual friend, Jerry and Connie began dating and on February 8, 1974, Jerry and Connie Sue Kamas were united in marriage in Alva. They lived in Carrollton, Texas for 8 more years before returning to Alva where he accepted the position as loan officer for the Alva State Bank. Jerry held many positons in his 37 year career at Alva State Bank where he retired as Executive Vice President in 2016. Jerry made many lifelong friends with the staff and clients during his tenure at the bank. While living in Texas, their first son, Cory was born on February 22, 1978. After moving back to Alva, their second son, Grant was born on September 27, 1982. Jerry enjoyed hunting, fishing, and playing golf. He was an avid fan of NWOSU Ranger sports, especially football and baseball. Jerry loved spending time with all his Ranger friends, especially his former teammates. As “homebase” for numerous Ranger activities (football games, golf tournaments, and homecoming), Jerry’s home was always THE gathering place for their friends. Jerry was an awesome husband, father and friend and will be missed by all. Besides his parents, he was preceded in death by one son, Grant Garrison. Jerry is survived by his wife, Connie, of Alva; one son, Cory Garrison of Alva; two sisters, Donna (Ron) Sweet, of Sugarland, Texas, and Judy (Doug) Kidwell, of Pampa, Texas; sisters in law, Kathy (Brent) Livingston and Claudia Kamas and husband, Dan, and other relatives and many friends. We were blessed with so many friends who helped us through this past year with transportation to doctor appointments, food, visits, calls, texts and to Pastor Chris Ruwaldt and our church family for their prayers and support. A special thanks to Dr. Phil Self, the staff of Complete Home Health, Beadles and many other specialists. In lieu of flowers, memorial contributions may be made through the funeral home to Ranger Athletics c/o NWOSU Foundation or the Alva First Baptist Church Youth Ministry for Falls Creek Camp Scholarships.

Jerry Lynn Garrison, son of the late Geral Dee and Velma Marie (Wright) Garrison, was born February 5, 1947, in Canadian, Texas, and passed away September 17, 2021, in Alva, Oklahoma, at the age of 74 years. There are no services planned at... View Obituary & Service Information

The family of Jerry Lynn Garrison created this Life Tributes page to make it easy to share your memories.

Send flowers to the Garrison family.