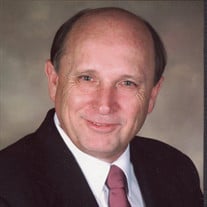 Funeral services for Jerry Boone Graybill will be 11:00 a.m. Thursday, July 9, 2020, at the Alva First Baptist Church with Rev. Ron Argo and Pastor Chris Ruwaldt officiating. Cremation will follow under the direction of Marshall Funeral Home of Alva. Jerry Boone Graybill, son of the late James Nolan and Mary Evelyn (Twyman) Graybill, was born October 22, 1943, on the farm north of Leedey, Oklahoma, and passed away July 5, 2020, in Alva, Oklahoma, at the age of 76 years, 8 months, and 13 days. Jerry graduated from Leedey High School, then obtained his Bachelor’s Degree in Education from SWOSU in 1968, and later he earned his Master’s Degree in Education. He taught school for six years in Westmoreland, Kansas and Taloga, Oklahoma. On June 8, 1969, he was united in marriage to Marie Elaine Palmberg at the Methodist Church in Palco, Kansas. In 1975, Jerry and Elaine moved to Alva where he worked as a Probation and Parole Officer for the Department of Corrections until his retirement in 2004. After his retirement, he helped Harold Cushenbery in the moving and storage business. Jerry attended the Alva First Baptist Church and was a member of the Town and Country Christian Church. He was a long time member of the Alva Kiwanis Club and Northwest Law Enforcement. He had a life long love of trains and loved to tinker. Everything that had broken was “Jerry-rigged” for repairs. Besides his parents, he was preceded in death by one sister, Darlene Leck. Jerry is survived by his wife, Elaine, of the home; one son, Jeff Graybill and wife, Amy, of Alva; one daughter, Melissa Fisher and husband, Chad, of Alva; four brothers, Duwayne Graybill of Weatherford, Vic Graybill and wife, Wallie, of Bethany, Bob Graybill and wife, Judy, of Clinton, and Calvin Graybill and wife, Verna, of Alva; six grandchildren, Braylyn Graybill of Copeland, Kansas, Saydy Graybill, Jaylyn Graybill, Braxton Fisher, Chloe Fisher, and Peyton Fisher, all of Alva; other relatives and friends. In lieu of flowers, memorial contributions may be made through the funeral home to the Beadles Nursing Home Activity Fund or the Cherokee Strip Museum.

The family of Jerry Boone Graybill created this Life Tributes page to make it easy to share your memories.

Send flowers to the Graybill family.