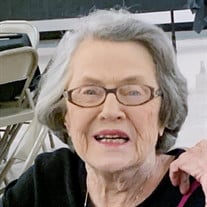 Graveside services for Jewel Maxine Nichols will be 10:30 a.m. Saturday, October 31, 2020, at the Alva Municipal Cemetery with Rev. Katie Hill officiating. Interment is under the direction of Marshall Funeral Home of Alva. Jewel Maxine Nichols, daughter of the late James Sylvester and Nita Jewel (Hightower) Hughes, was born September 2, 1926, in Holdenville, Oklahoma, and passed away October 26, 2020, in Alva, Oklahoma, at the age of 94 years, 1 month, and 24 days. In 1946, Maxine married Warren Elmer (Bud) Nichols at the Methodist Church in Edmond, Oklahoma. Following their marriage, they made their home in Edmond. She and Bud moved to Perry, Oklahoma in 1948. Bud taught Mathematics and coached all sports. Another move took them to Alva, Oklahoma in 1953. Maxine received her Bachelor’s Degree from Northwestern State College in 1960, majoring in Elementary Education and English. Her Master’s Degree was obtained from Northwestern State College in Alva in 1966. In her 30 years of teaching in Alva Public Schools, Maxine instructed hundreds of students as a Physical Education teacher and then as an English teacher. Many recall her as a strict but fair teacher. She would cringe whenever she encountered grammatical errors, especially if a sentence was ended with a preposition! And don’t forget to put two spaces between the end of a sentence and the beginning of the next! Maxine was a sponsor to the Student Council and Buggettes Pep Club. She was highly respected by her peers, parents and students. In 2018 Maxine was honored by Alva High School Foundation as a Distinguished Teacher, an award she valued highly. As an educator, Mrs. Nichols loved her job, truly loved her students and demanded the very best of her students and herself. From the time of her retirement until the time of her passing, Jewel Maxine Hughes Nichols treasured the life God had blessed her. She enjoyed reading, playing bingo, and was a very serious lifelong bridge player. She was an intellectual at heart, enjoying activities that challenged her. Maxine had a soft and compassionate side to her. She would truly listen as you would pour out your heart. Maxine did not judge and it was not her way to speak ill of anyone. Maxine felt like she had many children. She once said, “All of my friends died and left me their kids!” She claimed us all! Maxine Nichols was a Mom to a lot of us! Maxine Nichols was a devoted wife to Warren “Bud” Nichols. In the words of Bud’s mother, Ruth, they not only loved each other, they actually liked each other. Both Maxine and Bud were committed to the world of education. Bud died in 2012 and Maxine made her home at the Homestead Retirement Center and Share Nursing Home in Alva until her death. Besides her parents, she was preceded in death by two sisters. Maxine is survived by one sister-in-law and one brother-in-law, Harold and Connie Myers; numerous nieces and nephews; other relatives and friends. Memorial contributions may be made through the funeral home to Share Convalescent Home Activity Fund.

The family of Jewel Maxine Nichols created this Life Tributes page to make it easy to share your memories.

Graveside services for Jewel Maxine Nichols will be 10:30 a.m....

Send flowers to the Nichols family.