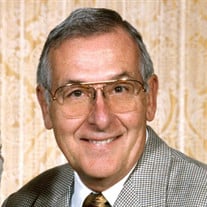 Memorial services for Jimmy Ray Holder will be at 2:00 p.m. Saturday, February 11, 2017, at the First United Methodist Church with Reverend Doctor Carol Cook-Moore officiating. Interment will be prior to the service under the direction of Marshall Funeral Home of Alva. Jimmy Ray Holder, son of the late John Wilkie and Vera Melsena (McKinney) Holder, was born January 30, 1927, at Hollis, Oklahoma, and passed away February 8, 2017, in Alva, Oklahoma, at the age of 90 years and 9 days. Jim graduated high school in Wellington, Texas. He then enlisted in the United States Navy and served in the Philippines. On December 21, 1947, he was united in marriage to Mary Nell Pyeatt at her parent's home in Custer County, Oklahoma. He obtained his pharmacy degree from Southwestern Oklahoma State University in 3 years. After graduation, Jim and Mary moved to Alva where he began filling prescriptions at Monfort Drug Store. He then bought Hester Drug and opened as Holder's Pharmacy. Holder Drug's motto has always been, "In business for your health" and Jim lived this philosophy everyday. Jim was a member of the First United Methodist Church, a charter member of The Share Trust and President of the Oklahoma Pharmaceutical Association. He was also the Chairman of Chamber of Commerce during the construction of the Chamber building, a member of the NWOSU Foundation Board, served as secretary of the Election Board and a member of the Elks Lodge, Moose Lodge and Alva Masonic Lodge. He also had many hobbies including flying, hunting, fishing, water skiing, snow skiing, golfing and horseback riding. In 2016, he was honored by being named the Old Cowhand for the Freedom Rodeo. Besides his parents, he was preceded in death by his sister, Helen Jo Poole. Jim is survived by his wife of 69 years, Mary, of Alva; two daughters, Mary Susan Simpson and husband, Brownie, of Shawnee, Kansas, and Sally Eggleston and husband, Ken, of Waynoka and one son, Todd Holder of Alva; six grandchildren, Emily Freeman and husband, Chris, of Shawnee, Kansas, Amanda Fehr and husband, Scott, of Lenexa, Kansas, Heidi Claassen and husband, Jed, of Newton, Kansas, Sara Warnick and husband, Garret, of Blanchard, Oklahoma, Adam Holder and wife, Lacey, of Oklahoma City, and Andrew Holder and wife, Kirsten, of Oklahoma City; nine great grandchildren: Isaac and Megan Freeman, Emma, Henry and Hudson Fehr, Livie, Claire and Cade Claassen, Mackie Warnick and a town full of friends. Memorial contributions may be made through the funeral home to the Alva First United Methodist Church, the NWOSU Foundation, and Arena Project, or Share Medical Center.

Memorial services for Jimmy Ray Holder will be at 2:00 p.m. Saturday, February 11, 2017, at the First United Methodist Church with Reverend Doctor Carol Cook-Moore officiating. Interment will be prior to the service under the direction of Marshall... View Obituary & Service Information

The family of Jim Holder created this Life Tributes page to make it easy to share your memories.

Memorial services for Jimmy Ray Holder will be at 2:00 p.m. Saturday,...

Send flowers to the Holder family.