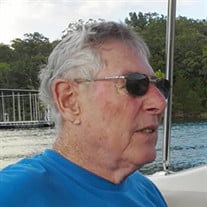 Memorial services for Joe Reed will be 2:00 p.m. Wednesday, August 7, 2019, at Marshall Funeral Home Chapel with H.J. Reed officiating. Cremation arrangements are under the direction of Marshall Funeral Home of Alva. Joe Hugh Reed, son of the late Leonard Sylvester and Vivien Martha (Chew) Reed, was born March 8, 1940, at Alva and passed away August 1, 2019, at Alva at the age of 79 years, 4 months, and 23 days. Joe attended school at Alva beginning at Horace Mann Elementary and graduating from Alva High School in the class of 1958. He participated in all sports and student council with many of his classmates becoming life-long friends. Joe attended Northwestern Oklahoma State University for two years, and having joined the National Guard at age 16, decided to go into the US Air Force as a navigator. Upon returning to Alva, Joe worked at the gas station at the corner of US Highways 281 and 64. He became proprietor in 1972 with Joe’s Texaco being frequented by Alva residents, NWOSU students, and travelers alike. Joe was raised in the lumberyards that his dad managed and where his mother kept books and chose to return to that work to be able to spend more time with family. He worked at W.W. Starr Lumber as yard manager until his retirement in 2005. On July 18, 1964 he was united in marriage to Fleta Dene Mercer at Alva. They made their home in Alva nearly all their married life and raised their family of three children. His kids and all their friends and activities were his world, and later grandchildren and great-grandchildren filled his heart. Joe spent his life loving family, fishing, camping, and traveling. His sense of humor and love will be missed by all. Joe was preceded in death by his parents, Leonard and Vivien Reed; and his stepmother, Carrie Reed. He is survived by his wife, Fleta Reed of Alva; his children, Chris Reed and wife, Holly, of Port Allen, Louisiana, Vicki Schlarb and husband, Kelly, of Alva, and Anthony Reed and wife, Denise, of Edmond; a brother, Len Reed of Alva; and a sister, Lynnette Gindlesberger and husband, Jim, of Alva. Also surviving are seven grandchildren, Brandi Peace and husband, David, of Alva, Megan Lopez and husband, Nico, of Broken Arrow, Lauren Leon and husband, Evan, of Edmond, Brianna Powell and husband, Chance, of Alva, Anthony Reed of Oklahoma City, Trevor Reed of Edmond, and Tanner Reed of Edmond; eleven great grandchildren; other relatives and many friends. Memorial contributions may be made through the funeral home to Juvenile Diabetes Research Foundation.

The family of Joe Hugh Reed created this Life Tributes page to make it easy to share your memories.

Memorial services for Joe Reed will be 2:00 p.m. Wednesday, August...

Send flowers to the Reed family.