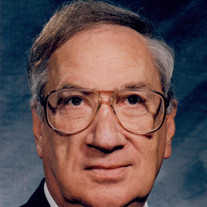 Funeral services for Dr. Joe Jack Struckle will be 2:00 p.m. Friday, March 24, 2017, at the Herod Hall Auditorium on the NWOSU campus with the Rev. Dr. Carol Cook Moore officiating. Interment will be in the Alva Municipal Cemetery under the direction of Marshall Funeral Home of Alva. Dr. Joe Jack Struckle, age 83, of Edmond, Oklahoma was reunited with his heavenly family on March 18, 2017. Joe was the youngest of seven children born on June 29, 1933 in Bryant, Oklahoma to the late Louis & Caroline (Luzar) Struckle. Joe’s father passed away while he was an infant thus raised by his adoring mother, Caroline and his older brothers and sisters. Joe’s mom was the ever present angel and guiding influence in his life that shaped his values and beliefs. He was also cared for by three father-like big brothers (Louis, Otto & Victor) and two loving sisters (Mary Josephine (Neumann) and Velma). He was preceded in death by all brothers and sisters listed as well as another infant sister (Margaret). Joe grew up hunting, fishing and playing sports in Bryant, Oklahoma where he graduated from high school. A short time after his graduation, Joe was drafted by the United States Army and served state side during the Korean Conflict. After active duty and while serving in the Army Reserves, Joe attended East Central University in Ada, Oklahoma where he earned a Bachelor of Science degree. While attending East Central University Joe’s life was forever impacted for the better when he met Barbara Ann Mitchell. On August 1, 1958, Joe united in marriage with his best friend, love of his life and respected partner. After Joe and Barbara were married, Joe attended Oklahoma State University where he was awarded a Master of Science degree. He later was awarded a doctoral degree in education from the University of Tulsa. Joe started his education career as a math teacher in both Shidler and Ponca City, Oklahoma. Joe would go on to serve as a math professor and later Dean of Men at Northern Oklahoma College in Tonkawa, Oklahoma. In 1968, Joe was hired as Associate Professor of Education and Dean of Students at Northwestern Oklahoma State University. In 1975, Joe was appointed as the sixteenth president of Northwestern Oklahoma State University where he served until his retirement in 2000. Joe’s tenure as Northwestern Oklahoma State University’s Chief Executive Officer is the longest in the university’s history. Joe was the recipient of many awards for distinguished service. In 1995, he was bestowed one of Oklahoma’s highest honors in education with his induction into the Oklahoma Educators Hall of Fame. He was also elected to the Oklahoma Higher Education Hall of Fame in 1999. While Joe received many accolades during his career, he would always quickly point out that any successes achieved were only the result of a great team that surrounded him in his life. If not for the guiding influence of his mom and siblings, the strength and passion of his dear wife Barbara, and the remarkable support from Northwestern Oklahoma State University faculty, staff and students, successes would not have been possible. Joe would say he had three families. The family he was honored to be born into, the family he and Barbara fostered and his Northwestern Oklahoma State University family. His love and passion for all three were deep and absolute. Joe is survived by his wife Barbara; his two sons Jay Struckle of El Reno, Oklahoma and Jeff Struckle and wife Sharon of Olathe, Kansas and two grandchildren Katelyn Struckle and Carter Struckle. Joe is also survived by several nieces and nephews. In lieu of flowers, memorial donations can be made to the Northwestern Oklahoma State University Foundation.

Funeral services for Dr. Joe Jack Struckle will be 2:00 p.m. Friday, March 24, 2017, at the Herod Hall Auditorium on the NWOSU campus with the Rev. Dr. Carol Cook Moore officiating. Interment will be in the Alva Municipal Cemetery under the... View Obituary & Service Information

The family of Dr. Joe Struckle created this Life Tributes page to make it easy to share your memories.

Send flowers to the Struckle family.