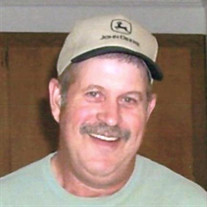 Memorial service at 1:00 p.m. Saturday, June 30, 2018, at the Bible Baptist Church in Alva with Pastor John Clapp officiating. He was cremated at his request under the direction of Marshall Funeral Home of Alva. John Andrew Anderson was born August 2, 1955, in Cherokee, Oklahoma. He passed away on June 24 at his home in Alva, Oklahoma. He was the son of Charles Edward Anderson and Effie Rachel (Bell) Anderson. John grew up in Cherokee where he attended school graduating in 1974. After graduating, John was employed by the Farmer’s Co-op, The Tucker Company, and various other businesses in the area before spending the last 28 years working in the same tire service facility first for Perry Tire and staying on through the transition to K&S Tire where he was employed until his death. On April 8, 1994, John was blessed with a daughter, Hallie. A little over a year later, on May 27, 1995, he was joined in marriage to Deb Whitely. They shared many happy years together until her death on December 31, 2012. John was a dear friend, beloved brother and uncle, and father. He loved celebrating family and looked forward to the annual Anderson Family Reunion where he loved grilling hamburgers and hot dogs and cooking breakfast every year. He was a huge Alva Goldbug fan and loved going to watch his great-nephews and others participate in multiple sporting events. In addition to enjoying high school athletics, John was a huge fan of OU football. Rarely did you see him without his OU hat atop his head. He was preceded in death by his parents; his sister, Georgia Randall; daughter, Hallie Link; and wife, Deb Anderson. John is survived by his sister Shirley (James) Harris of Vaucluse, South Carolina, Tressie (Allen) Hess of Kiowa, Kansas, and Jack (Susan) Anderson of Norman along with many loving nieces and nephews, other relatives, and friends. Memorials contributions may be made in John’s memory through Marshall Funeral Home.

Memorial service at 1:00 p.m. Saturday, June 30, 2018, at the Bible Baptist Church in Alva with Pastor John Clapp officiating. He was cremated at his request under the direction of Marshall Funeral Home of Alva. John Andrew Anderson was born... View Obituary & Service Information

The family of John Andrew Anderson created this Life Tributes page to make it easy to share your memories.

Send flowers to the Anderson family.