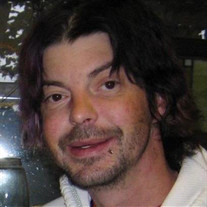 A come and go memorial reception in memory of John Quillin Powders will be from 1:00 to 3:00 p.m. Thursday, June 7, 2018, at Marshall Funeral Home Chapel. John was cremated at his request under the direction of Marshall Funeral Home of Alva. John Quillin Powders, son of the late Vernon Neil and Sharon McCoy (Hair) Powders, was born March 16, 1972, at Mooreland, Oklahoma, and passed away May 26, 2018, at Alva, Oklahoma, at the age of 46 years, 2 months, and 10 days. John graduated from Alva High School and attended Northwestern Oklahoma State University. He lived in Alva most of his life, except for a couple of years in California. He loved all things in the entertainment industry, including entertainment news, celebrity gossip, television, movies and 80's music. Collecting antiques and collectibles was another of his passions, often going to the garage sales in the area. He also loved animals. He was preceded in death by his parents. John is survived by his sister, Laura Thomas and husband, Jeff, of Owasso, Oklahoma; his niece, Stella McCoy Thomas of Owasso; other relatives and friends. Memorial contributions in his memory may be made through the funeral home to Creatures Concerns.

The family of John Quillin Powders created this Life Tributes page to make it easy to share your memories.

A come and go memorial reception in memory of John Quillin Powders...

Send flowers to the Powders family.