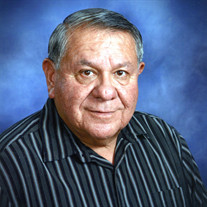 Mass of Christian Burial for John Sabedra will be 11:00 a.m. Saturday, January 19, 2019, at Our Mother of Mercy Church with Father Bala Sagili Jesudas officiating. Inurnment will be in the Waynoka Municipal Cemetery under the direction of Marshall Funeral Home of Waynoka, LLC. He was cremated at his request. John Sabedra, son of the late Ronaldo Pacheco and Martha Romo (Lopez) Sabedra, was born February 2, 1942, in Waynoka, Oklahoma, and passed away January 2, 2019, at his home in Mooreland, Oklahoma, at the age of 76 years and 11 months. John graduated from Waynoka High School. He went to work as an operator for ANR Pipeline. He also worked on small engines. He was a member of Our Mother of Mercy Church. His family was always important to him and he spent a lot of time visiting with them and attending their activities. He enjoyed breakfast every morning at McDonalds with his coffee buddies. He was always looking for bargains and antiques at auctions and thrift stores. He loved watching the Chicago Cubs and the Chicago Bears. Besides his parents, he was preceded in death by his daughter, Cathy Morgan; one brother, Pete Sabedra; and his sister-in-law, Arcelia Sabedra. John is survived by one son, Jon Sabedra of Mooreland; six grandchildren, Paisley, Macey and Dylan Sabedra, all of Mooreland, Shali Ross of Mooreland, Eric Ross and wife, Jordan, of Waynoka, and Skyler Ross of Waynoka; one brother, Rudy Sabedra and wife, Lupe, of Colorado; three sisters, Lucy Gonzales of Illinois, Dolores Tubb and husband, Howard, of Kansas, and Stella Beat and husband, Larry, of Pennsylvania; his special friend, Jarita Lahr of Mooreland; other relatives and friends. Memorial contributions may be made in his memory to the funeral home.

Mass of Christian Burial for John Sabedra will be 11:00 a.m. Saturday, January 19, 2019, at Our Mother of Mercy Church with Father Bala Sagili Jesudas officiating. Inurnment will be in the Waynoka Municipal Cemetery under the direction of Marshall... View Obituary & Service Information

The family of John Sabedra created this Life Tributes page to make it easy to share your memories.

Send flowers to the Sabedra family.