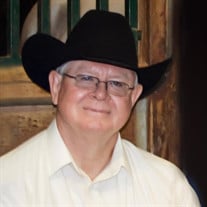 Memorial services for John Preston will be 2:00 pm, Thursday, March 31, 2022, at the Marshall Funeral Home Chapel. Arrangements are under the direction of Marshall Funeral Home of Alva, Oklahoma. John Preston, "Press" as he was known by most, son of J.W. and Ruth (Vore) Small was born on April 14, 1952, in Alva, OK. He passed away at St. Francis Hospital in Tulsa, OK, on March 26, at the age of 69 years, 11 months, and 13 days from complications caused from contracting and battling COVID over a year ago. He grew up on his family’s farm in Dacoma, OK. He attended Dacoma Public School and graduated from the second class of Carmen-Dacoma High School in 1970 as Valedictorian. He enjoyed playing the piano, debate, and sports. His passion for basketball helped him earn a spot on the All-State Team his senior year and a scholarship from the University of Oklahoma from Coach John McCloud. While attending OU he majored in business while playing basketball. His name is listed on the Letterman’s statue in front of the Memorial Stadium on OU’s campus. In 1974 he married Pamela Duel in Carmen, Oklahoma. They made their home in Dallas, Texas, for seven years. He was employed by Woodstock Commodities Inc. and later was a manager at a home improvement business, Wylie Aluminum Inc., in Bedford, Texas. They returned to Dacoma in 1980 to raise their family in a small community while helping with the family business, JW Small Hog, Inc. and farming. Their first son, Justin, was born that same year followed by Travis three years later in 1983. During the following 20 years his passion was attending his sons' sporting events. He traveled all over Oklahoma and Kansas and watched hundreds of baseball and basketball games throughout those years. When not at baseball or basketball games, he loved horse racing. Horse racing has been in the Small family history starting with his grandfather Paul Small. So it was no surprise Press and his dad, J.W., bought some race horses. The whole family enjoyed years of going to the races and watching his horses. He was still active with his horses up to his passing. Press is survived by two sons, Justin Small, wife Miranda and children Rylan, Jaylee and Sawyer of Edmond, OK., Dr. Travis Small, wife Melissa and children John (J.W.) and Vivian of Jenks, OK, and his sister, Jennie Small of Woodward, OK. He was preceded in death by his parents J.W. and Ruth Small and two sisters, Jeanette Atha and Lisa Boler. In lieu of flowers the family requests memorials be made to Oklahoma Heart Association. Donations can be handled through the funeral home.

Memorial services for John Preston will be 2:00 pm, Thursday,...

Send flowers to the Small family.