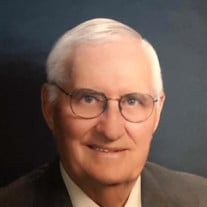 Funeral services for John Weslie White will be 11:00 a.m. Monday, December 31, 2018, at the Zion Lutheran Church with Pastor Aaron Wagner officiating. Interment will be in the Zion Lutheran Cemetery under the direction of Marshall Funeral Home. John Weslie White, son of John Glen and Lucille (Kassik) White, was born October 27, 1932, two miles east of Dacoma and passed away December 27, 2018, at Oklahoma City at the age of 86 years and 2 months. He graduated from Dacoma High School. In 1950, he was united in marriage to Nelda Lou Quast in Alva. Their hobbies were making crafts and quilts and going to craft shows. They had two children, John Louie (J.L.) White and Cindia Gail. John lost his wife of 52 years in 2002. John had a very active life. He was an artist and everyone enjoyed his beautiful paintings. He worked at Starr Lumber about 10 years. He did remodeling and building new homes. He then worked for Savere Refrigeration for about 10 years, then doing full time farming in the summer and building new homes and remodeling in the winter. In January 1985, he and his son, J.L., opened White Door and Window Company. They made home improvements for many homes in northwest Oklahoma. It meant so much to him to help build the new addition on his church, the Zion Lutheran Church. John served as an Elder and on other church boards for several years. In 2003, he married Alfreda Doherty. He continued farming but also enjoyed traveling with friends, taking their RV to area lakes and camping, and playing cards and train dominoes. In 2018, they moved to the Homestead. They enjoyed their many friends, family, and extended family. John is survived by his loving wife, Alfreda, of Alva; two children, John Louie White and wife, Jan, of Gunterville, Alabama, and Cindia White McDonald and husband, Don, of Tuttle; five grandchildren, Amber and Chris Cook of Purcell, Amanda and William Hale of Bridge Creek, Oklahoma, Ryan and Amie White of Skiatook, Oklahoma, Jeena White and Tony Dickey of Alva, and Aaron and Morgan McDonald of Mustang, Oklahoma; four step-children, Debbie and Bob Ellis of Newkirk, Oklahoma, David and Susan Doherty of Windsor, Colorado, Pam and Tony Nash of Andover, Kansas, and Melinda and John Epperson of Wichita, Kansas; two sisters, Janet and Dennis Weigand of Edmond, and Judy and Bob Kinnard of Claremore. Also surviving are step grandchildren, Preston and Shay Ellis of Buena Vista, Colorado, Megan and Josh Steele of Morris, Faith Doherty of Windsor, Colorado, Kerri and Mike Espinosa of Derby, Kansas, Kyle and Karissa Nash of Andover, Kansas, Taylor and Ethan Pardue of State Road, North Carolina, Cameron Schultz and Montanna Peterson of Alva, and a large number of much loved great grandchildren; other relatives and many friends. Memorial contributions may be made through the funeral home to the Zion Lutheran Church or the Alva Senior Citizens Center.

Funeral services for John Weslie White will be 11:00 a.m. Monday, December 31, 2018, at the Zion Lutheran Church with Pastor Aaron Wagner officiating. Interment will be in the Zion Lutheran Cemetery under the direction of Marshall Funeral Home. John... View Obituary & Service Information

The family of John Weslie White created this Life Tributes page to make it easy to share your memories.

Send flowers to the White family.