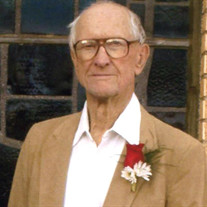 Memorial services for John Andrew Wiebener will be 2:00 p.m. Saturday, June 16, 2018, at the Marshall Funeral Home Chapel with Rev. Ron Pingelton officiating. John was cremated at his request under the direction of Marshall Funeral Home of Alva. John Andrew Wiebener, son of the late John Chris and Clara Ellanora (Rockenbach) Wiebener, was born September 1, 1922, on the home place near Alva, Oklahoma, and passed away peacefully in his sleep with his brother, Robert, and his nephew, James Wiebener, at his side June 12, 2018, in Alva, Oklahoma, at the age of 95 years, 9 months, and 11 days. John graduated from Alva High School and attended college at NWOSU for a couple of years. He served in the United States Navy. He farmed all his life in the Alva area. John was a member of the Alva First Christian Church (Disciples of Christ) and the Alva VFW. He enjoyed playing softball when he was younger and loved bowling, which he did until he was over 90 years of age. He also liked to listen to St. Louis Cardinals baseball. He also liked going to the Senior Citizens Center where first started going with his mother and attended for over 30 years. He enjoyed the meals and the company and loved playing Billiards, Domino’s, and helping make noodles. Besides his parents, he was preceded in death by three sisters, Catherine Bergland, Ella Louise Reedall, and Peggy Girard. John is survived by one brother, Robert Wiebener and wife, Waynell, of Alva; 13 nieces and nephews, other relatives and friends. Memorial contributions may be made through the funeral home to the Alva Senior Citizens Center.

The family of John Andrew Wiebener created this Life Tributes page to make it easy to share your memories.

Memorial services for John Andrew Wiebener will be 2:00 p.m....

Send flowers to the Wiebener family.