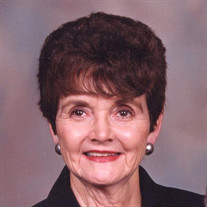 Memorial services for Johnece Ellen Ryerson will be 3:00 p.m. Friday, May 4, 2018, at the First United Methodist Church with Rev. Dr. Carol Cook Moore officiating. There will be a reception following the service. Cremation arrangements are under the direction of Marshall Funeral Home of Alva. Johnece Ellen (Houghlin) Ryerson, daughter of the late John Froman and Jessie Hilda (Arnold) Houghlin, was born January 4, 1938, in Pauls Valley, Oklahoma, and went home to be with her Lord and Savior, Jesus Christ, on May 1, 2018, at Oklahoma City, at the age of 80 years. Johnece was born and raised in her beloved hometown of Pauls Valley, where she graduated Valedictorian of her 1956 high school class. Following this, she attended the University of Oklahoma and was a member of Delta Delta Delta sorority. Additionally, she was involved in numerous campus organizations and activities and was named an OU Top Ten Freshman, Mortar Board, Big Woman On Campus and later graduated with highest academic honors as a Phi Beta Kappa. While at OU, she met the love of her life, Richard Norman Ryerson. They were married at the Pauls Valley Methodist Church on June 12, 1959. Upon graduation, Johnece taught high school in Lawton while Richard served as an officer in the U.S. Army at Fort Sill. Subsequently, Johnece and Richard moved back to his hometown of Alva to manage their 3-generation family lumber business. Together they raised two children, Julia (Ryerson) Witherington and John Ryerson. In Alva, Johnece was an active member of the First United Methodist Church where she was involved in United Methodist Women, Mary Martha Circle, and many children’s Sunday School activities. She was a charter member of the ET chapter of P.E.O., active in Holly Club, D.A.R., Woods County Republican Women, and served as co-chairperson of the 2007 Oklahoma Centennial Celebration for Alva. Johnece invested much of her time in other community organizations such as: Alva High School booster clubs, the Alva Public Library, Meals on Wheels, and Northwestern Oklahoma State University. In recent years, she originated the idea, helped design, and funded new signage at Northwestern’s Alva campus. Johnece was preceded in death by her parents, John and Jessie Houghlin. Johnece is survived by her husband of 58 years, Richard, of Alva; her dear sister and best friend, Lynn Bassett and husband, Fred, of Wichita Falls, Texas; her daughter, Julia Witherington of Plano, Texas; her son, John Ryerson and wife, Amy, of Alva; her six grandchildren, Sarah, Elizabeth, and David Witherington and Ben, Katherine, and Madeline Ryerson; other relatives and many friends. Memorial contributions may be made through the funeral home to honor Johnece’s life to either the First United Methodist Church of Alva or the Northwestern Oklahoma State University Foundation.

Memorial services for Johnece Ellen Ryerson will be 3:00 p.m. Friday, May 4, 2018, at the First United Methodist Church with Rev. Dr. Carol Cook Moore officiating. There will be a reception following the service. Cremation arrangements are under... View Obituary & Service Information

The family of Johnece Ellen Ryerson created this Life Tributes page to make it easy to share your memories.

Memorial services for Johnece Ellen Ryerson will be 3:00 p.m....

Send flowers to the Ryerson family.