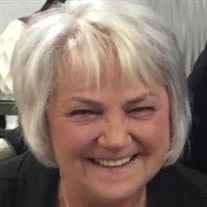 Memorial service for JoRetta Kaye Doctor will be 2:00 p.m. Thursday, September 24, 2020 at the Marshall Funeral Home Chapel. Arrangements are under the direction of Marshall Funeral Home of Alva. JoRetta Kaye Phillips Doctor, 64, of Alva passed away Thursday September 16, 2020, at home surrounded by family and friends following a long battle with MS. JoRetta Kaye Phillips Doctor was born August 7, 1956, at Enid Memorial Hospital to Coy and Bessie (Neff) Phillips. JoRetta grew up in the town of Alva. She attended Alva Public Schools. While in high school she was a member of the marching band, stage band, and concert band. She was a member of both the Oklahoma and National Honor Societies. She was the 1974 Salutatorian of Alva High School. She went on to attend college at Northwestern earning her Bachelors Degree in accounting. She was a member of the Alva Women’s Softball Association and a member of three bowling leagues in Alva. She had her one and only daughter Brooke (Doctor) Bow in December of 1978. She was a loving, supportive, strong mother to Brooke. JoRetta took her first accounting job in 1980 working for Bob Coker of Alva. Working for Bob Coker created opportunities for her to work in larger dealerships throughout Oklahoma, which in turn allowed her to move around the state. In 1984 she relocated to Skiatook to work for a local dealership. In 1986 she moved to Lexington, Oklahoma, to work for Reynolds Ford of Norman. After a couple of years of commuting she purchased a home in Norman in 1988. In 1989 she accepted an opportunity to work as an assistant to the Assistant Director of the National Severe Storms Lab in Norman. JoRetta was so strong, she was always up for any challenge. In 1991 she was selected for a position at MTSC as a technical writer for the United States Postal Service System Maintenance. In 1993 she returned to a dealership accounting position with Jackie Cooper of Norman. She held this position until her health issues forced her into retirement in 1998. In 2008, JoRetta returned to Alva to be with the love of her life, Billy Simon. They made their home together north of Alva, where she loved gardening, canning food, planting flowers and bird watching. Together they raised their baby girl, dog Jazz. Billy and JoRetta enjoyed their time together fishing, sitting by the burn pit, traveling, basically anything outdoors. She loved being with family and friends. She was always ready for company. She was preceded in death by her father, Coy Phillips, mother, Bessie Phillips (Neff), and brother Leslie Phillips. She is survived by Billy Simon of the home; daughter, Brooke Bow and her husband, Wade Bow of Norman; brother, Gib Phillips and wife Pam of Perry, brother, Merlin Phillips and wife, Lorene of Tecumseh; sister, Betty Mantz and husband Roger of Alva; numerous nephews, nieces, and a close family friend, Devin Hamlin and son James, also, her loving Jazz. Memorial contributions may be made in her memory through the funeral home to the National MS Society.

The family of JoRetta Kaye Doctor created this Life Tributes page to make it easy to share your memories.

Memorial service for JoRetta Kaye Doctor will be 2:00 p.m. Thursday,...

Send flowers to the Doctor family.