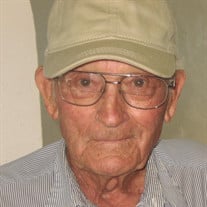 Joseph Ray Lansdown, the youngest child of the late Reverend Ezra Ray and Irene (Bush) Lansdown, was born April 12, 1929, at Laverne, Oklahoma, and passed away December 3, 2016, at Buffalo, Oklahoma, at the age of 87 years, 7 months, and 21 days. At his request, he donated his body to science and private family services will be at a later date. Growing up, Joe lived in several places before his family moved to Alva where he graduated from Alva High School and attended NWOSU. He proudly served his country during the Korean Conflict in the United States Army with the 45th Infantry Signal Corps. On October 28, 1950, he was united in marriage to Dorothy (Rauh) Lansdown at DeRidder, Louisiana. They lived in Alva where he worked for Southwestern Bell Telephone for over 35 years. After his retirement from the phone company he farmed full time. Joe was a member of the Lutheran Church. He loved to work on the farm and fish. He also enjoyed helping people by mowing their grass or doing whatever he could for them. Besides his parents, he was preceded in death by his wife, Dorothy; 10 brothers, Pat, Floyd, Perry, Orvil, Hilton, Lawrence, Paul D., Irvan, Ivan, and Ralph; 3 sisters, Cecil Doris Culp, Stella Irene Bullard, and Mary Edith Tarrant, and by a 1st cousin Laura Mae Bush Tolle, who lived in the Lansdown home. Joe is survived by one son, Bill Lansdown of Alva; one daughter, Dorothy Jo Taylor of Alva; and one brother, John L. Lansdown, of Ponca City; two grandchildren, Jordan Wade Taylor and wife, Sara, of Waynoka, and Jay William Taylor of Alva; two great grandchildren, Coralette Taylor and Wolfgang Taylor, both of Waynoka with another great-granddaughter due in April, five sisters--in-law, Jo Rhea Lansdown, Grace Lansdown, and Verna Dubben, all of Alva, Maxine Lansdown of Enid, and Anne Lansdown; many, many nieces and nephews; other relatives and many friends. Memorial contributions may be made through the funeral home to Grace Living Center or Faith Hospice.

Joseph Ray Lansdown, the youngest child of the late Reverend Ezra Ray and Irene (Bush) Lansdown, was born April 12, 1929, at Laverne, Oklahoma, and passed away December 3, 2016, at Buffalo, Oklahoma, at the age of 87 years, 7 months, and 21... View Obituary & Service Information

The family of Joseph Ray Lansdown created this Life Tributes page to make it easy to share your memories.

Joseph Ray Lansdown, the youngest child of the late Reverend...

Send flowers to the Lansdown family.