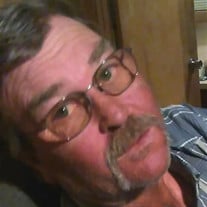 Memorial services for Justin Wilcox will be 2:00 p.m., Saturday, March 23, 2019, at the Marshall Funeral Home Chapel, with Rev. Mark Kinkle officiating. Cremation arrangements are under the direction of Marshall Funeral Home of Alva. Justin Lee Wilcox, son of James Leroy and Marilyn Ann (Johnson) Wilcox, was born March 23, 1963, at Fairview, and passed away March 15, 2019, at his home near Freedom at the age of 55 years, 11 months, and 22 days. Justin attended school several places before moving to Waynoka where he graduated high school. On February 24, 1996, he was united in marriage to Anna Lorraine Brune at Waynoka. They made their home in Avard and Waynoka, before moving near Freedom where they raised their family. He was a past member of the U.S. Team Roping Association. Riding bulls, roping cattle, and taking care of his horses were what he enjoyed most. Justin was also a ranch hand. Justin was preceded in death by his father-in-law, Delmer Brune. He is survived by his wife, Anna Wilcox of Freedom; his parents, Marilyn Beatty and husband, William, of Waynoka, and James Wilcox of Hennepin; his children, Maria Lee Helton and husband, Thane, of Waynoka, Tyerell Wayne Wilcox and fiancé, Cashlynn Dezort, of Woodward, and Timothy Lane Wilcox of Freedom; one grandchild, Avery Anna Wilcox, and two that expected later this year; one brother, Jimmie Wilcox of Spearman, Texas; one sister, Kathy Rich and husband, David, of Spearman, Texas; mother-in-law, Mary Brune of Waynoka; many nieces and nephews, other relatives and friends. Memorial contributions may be made through the funeral home to the American Heart Association.

The family of Justin Lee Wilcox created this Life Tributes page to make it easy to share your memories.

Memorial services for Justin Wilcox will be 2:00 p.m., Saturday,...

Send flowers to the Wilcox family.