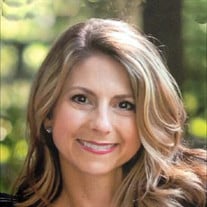 Funeral services for Kami Steele will be 1:00 p.m. Monday, July 25, 2016, at the Carmen Christian Church with Rev. Kirk Board and Rev. Brian Gossett officiating. Interment will be in the Carmen City Cemetery under the direction of Wentworth Mortuary, LLC. Kami Janell, daughter of Robert Lee and Sharon Kay (Goss) Knoll, was born July 8, 1971, at Greeley, Colorado, and passed away July 20, 2016, at M.D. Anderson Cancer Center, Houston, Texas, at the age of 45 years and 13 days. She graduated from Leavenworth High School and also from Kansas State University where she loved to fly high as a cheerleader. On April 4, 1998, she was united in marriage to Sam Bushey. Kami was a member of the Gateway Church in Keller. She was an occupational therapist for several years. On March 21, 2004, she was united in marriage to Michael Steele. They have two daughters, Brittan and Landry. They made their home in Colleyville, Texas, before moving to Keller, Texas, where they have lived for the past four years. Kami was interested in tennis and traveling with her tennis team. She had a therapy dog and visited many nursing homes and hospitals. She was always helpful and encouraging to others. Kami loved to travel and shop. She treasured all family dinners, especially the dinners at Pappas Steakhouse. The beach was a favorite vacation spot. She enjoyed all sports and especially the fantasy football league that she was involved in. Kami was preceded in death by her husband, Sam; and grandparents, Isidore and Barbara Knoll and Robert Goss. She is survived by her husband, Michael of Keller, Texas; two daughters, Brittan Steele and Landry Steele both of Keller, Texas; her parents, Robert and Sharon Knoll of Plano, Texas; her sister, Kenzie Knoll of Plano, Texas; her grandmother, Orpha Goss of Carmen; other relatives and many friends. Memorial contributions may be made through the funeral home to the Carmen Christian Church or the Covenant Christian Academy.

Funeral services for Kami Steele will be 1:00 p.m. Monday, July 25, 2016, at the Carmen Christian Church with Rev. Kirk Board and Rev. Brian Gossett officiating. Interment will be in the Carmen City Cemetery under the direction of Wentworth... View Obituary & Service Information

The family of Kami Janell Steele created this Life Tributes page to make it easy to share your memories.

Send flowers to the Steele family.