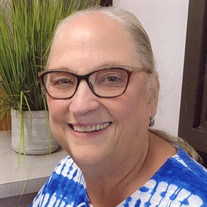 Celebration of Life services for Karen Sue (Ashton) Tucker will be 2:00 p.m. Saturday, March 12, 2022, at the Burlington School Auditorium in Burlington, Oklahoma, with Doug Graham officiating. Interment will be in Riverview Cemetery in Kiowa, Kansas, under the direction of Marshall Funeral Home of Alva. There will be a visitation with family 4:00-6:00 p.m., Friday, March 11, 2022, at the Schupbach Haus, 405 S. 7th, Kiowa, Kansas. Karen Sue Tucker, daughter of Dorothy Lee (Crusinbery) Ashton and the late Paul Wayne Ashton, was born on February 7, 1953, at Vance Air Force Base, Enid, Oklahoma, and passed away in the Kiowa District Hospital on March 6, 2022, at the age of 69 years and 27 days with her husband at her side. Karen graduated from Waynoka High School with the Class of 1971 and in 1976 she earned her Bachelor Degree in Social Work from Northwestern Oklahoma State University and followed in 1986 with a Masters of Behavioral Science. She began her career as a social worker in Alva with the State of Oklahoma Department of Human Services in 1978 and retired after 35 years of service on January 1, 2013. She became county director working in Fairview, and then promoted up to multi-county director with her office in Alva. In high school, her passion was basketball and you would find her playing several nights a week. All while assisting her family on the family farm with farming and livestock. Her love for basketball led her to coaching the Alva 5th and 6th grade girls basketball traveling team. As a member of the Alva bowling league she and her teammates competed at state. Karen was an active member of the Riverside Church of Christ in Burlington, after being baptized into Christ in the early 1980's at the College Hill Church of Christ in Alva, Oklahoma. Karen’s bright loving personality was brought out in her many hobbies and interests. Her dedication to many community service and outreach projects was very well known throughout Alva, Burlington, and surrounding communities. She enjoyed spending time with family and was especially fond of working cattle with them. Her granddaughters brought her the greatest joy. Playing cards, boot scootin’ line dancing and traveling was life long continued hobbies. She was united in marriage to Robert “Bob” Dale McNally on the December 18, 1971. To this marriage was born a daughter, Barbara Ann in 1975. After the tragic loss of Bob in 1981, she moved to Alva and met Mark Alan Tucker and they were united in marriage on May 28, 1983, and he adopted Barbara in February 1989. She was preceded in death by her father, Paul Wayne Ashton; her first husband, Robert Dale McNally; her in-laws, Sarah and Dale McNally and Verna and Cecil Tucker, Jr.; and many other loved ones. Karen is survived by her husband just short of 39 years, Mark, of Burlington; daughter, Barbara Ann Baird and husband, Alan, of Pflugerville, Texas; mother, Dorothy Ashton; brother, Dennis Wayne Ashton and wife, Karen, of Murray, Utah; brother, Terry Lynn Ashton and wife Denise, of Waynoka; sister, Linda Lee Earl and husband Michael, of Tulsa; granddaughters, Olivia Paige and Isabella Claire Baird of Pflugerville, Texas; many nieces, nephews, other relatives and friends. Memorial contributions may be made through the funeral home to the Kiowa District Hospital or the Freedom Gates Boys Ranch.

Celebration of Life services for Karen Sue (Ashton) Tucker will be 2:00 p.m. Saturday, March 12, 2022, at the Burlington School Auditorium in Burlington, Oklahoma, with Doug Graham officiating. Interment will be in Riverview Cemetery in Kiowa,... View Obituary & Service Information

Celebration of Life services for Karen Sue (Ashton) Tucker will...

Send flowers to the Tucker family.