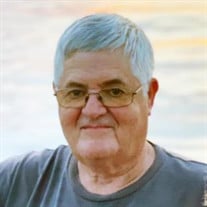 Memorial services for David Fearing with be 2:00 pm Saturday, January 23, 2021, at the Cherokee Strip Museum Annex. Cremation arrangements are under the direction of Marshall Funeral Home. We will livestream the service on Marshall Funeral Home Facebook Page. Masks are requested. Karl David Fearing, son of Glenn and Dorothy (Morton) Fearing, was born on December 23, 1949, and passed away suddenly on January 9, 2021, at the age of 71. Dave lived throughout his childhood in Burr Oak, Kansas, growing up with Mid-West values: respect your parents, treasure your wife, and teach your children. Upon graduation from Kansas State University in 1973 (forever becoming a lifelong Wildcat), with a degree in Physical Education, Dave was able to pursue his passion for coaching. In 1977, he met Donna Hinkle and they were married in 1979. Dave and Donna had two sons: David Burke in 1983 and Michael Joseph in 1985. In 1980, they moved to Portland, Texas, where Dave coached High School basketball until 1998. He was a highly respected coach by his players and fellow coaches. Dave earned many awards while coaching for the Portland Wildcats: All Metro Coach of the Year, All South Texas Coach of the Year, and 15-4A Coach of the Year in 1988. He took a team to the Regional Quarter Finals, was a member of Texas Association of Basketball Coaches, serving a stint as an officer. Dave was published in Texas Coach in 1989 and in Basketball Clinics in 1994 and 1995. In 1996, the 9th Annual Texas Basketball Magazine out of Houston reported “there were only three other coaches in the state of Texas that have more wins in the same number or less years of coaching than Gregory-Portland’s Coach Fearing.” Dave amassed over 400 basketball wins, and was proud to have coached both of his sons. He often said he taught so that he could coach. In 1998, the family moved to Quinlan, Texas, and Dave continued coaching until his retirement in 2010. He touched so many lives and was always moved whenever a former player contacted him. While living in Quinlan, Dave bought a jukebox that played 45rpm records. He spent countless hours choosing which 45's he wanted on it. Thus was born the “Garage Hop”, a dance he would hold in the garage. The Garage Hop continued after the move to Alva. He also collected basketball and other sports memorabilia, and housed the massive collection in his own private temperature controlled room. David and Mike, along with Asst. Basketball Coach Phlieger would go to many sports events collecting “bobble heads” for Dave. In 2011, Dave and Donna moved to her hometown of Alva, Oklahoma. Dave promptly made new friends and felt at home in Alva. He and friend, Randy Fox, became the “Junker Boys”, an endeavor that he enjoyed tremendously. Dave and Donna always looked forward to camping trips with the Alva friends. They once took the camper on a road trip to go to Austin, but made a detour to see Lonnie in Michigan, on to Niagara Falls, down to Pensacola, Florida, to see son David, over to New Orleans, finally arriving in Austin to see son Mike. After thirty-two days together in a camper along with Schaeffer the dog, Dave and Donna knew they loved to “glamp”. Dave was preceded in death by his parents, Glenn and Dorothy Fearing; his mother-in-law, Bonnie (Hinkle) Sebren; and a sister-in-law, Becky Hinkle. He is survived by his wife of 41 years, Donna; sons, David Fearing and wife, Erin, and their daughter, Karina Rose, of Bayonne, New Jersey, and Mike Fearing and wife, Sarah, and their daughter, Eyrie Beth, of Austin, Texas; sister, Sherry Campanelli and husband, Bob; nephews, David and Matt Campanelli; sister-in-law, Mika “Popo” Cahoj; and niece, Ferran Weese; other relatives and many friends. Dave was known as “Pops” to the Grand-Girls and tried to see them as often as possible. His face lit up when he was with those little girls. He had a strong and steady character and valued honesty and integrity. He was always concerned for the safety of his family and friends, relaying to them the latest weather report, road conditions, and ending with, “Watch out for the deer!” Dave was a good husband, father, Pops, brother, brother-in-law, and companion; he will he missed by so many.

Memorial services for David Fearing with be 2:00 pm Saturday, January 23, 2021, at the Cherokee Strip Museum Annex. Cremation arrangements are under the direction of Marshall Funeral Home. We will livestream the service on Marshall Funeral... View Obituary & Service Information

Memorial services for David Fearing with be 2:00 pm Saturday,...

Send flowers to the Fearing family.