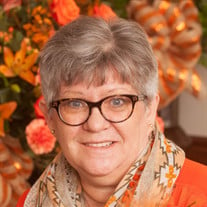 Memorial services for Kelly Caldwell will be 11:00 a.m. Saturday, August 19, 2017, at the Marshall Funeral Home Chapel with Rev. Harold Henson officiating. Cremation arrangements are under the direction of Marshall Funeral Home. Kelly Kay Caldwell, daughter of Vaughn Caldwell and the late Karen Kay (Burling) Caldwell, was born June 15, 1959, at Wichita, Kansas, and passed away August 13, 2017, in Oklahoma City, Oklahoma, at the age of 58 years, 1 month, and 28 days. Kelly grew up in Alva and graduated from Alva High School. She attended Northwest Technology Center and worked as a data processor at BancCentral until she was unable to work due to her health. She was also a very talented artist. She devoted her life to her kids and grandkids. She was preceded in death by her mother, Karen. Kelly is survived by her son, Travis Caldwell and his wife, Meagan, of Alva; her daughter, Tristan Caldwell of Alva; her father, Vaughn Caldwell of Alva; her brother, Timothy Caldwell and his wife, Teresa, of Owasso; her sister, Kimberly Burger and her husband, Larry, of Alva; five grandchildren, Kacie, Kursten, Kamryn, Skylar, and Bradyn; one niece, Mikayla; two nephews, Gracyn and Carstyn; and other relatives and friends. Memorial contributions may be made through the funeral home to the Northwest Domestic Crisis Shelter.

The family of Kelly Kay Caldwell created this Life Tributes page to make it easy to share your memories.

Memorial services for Kelly Caldwell will be 11:00 a.m. Saturday,...

Send flowers to the Caldwell family.