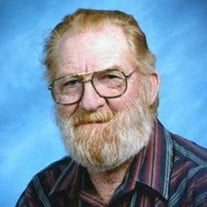 A graveside memorial service for Kenneth Leroy Wilson, formerly of Waynoka, will be 1:30 p.m. Thursday, May 21, 2015, at the Fair Valley Cemetery, Freedom, Oklahoma. Arrangements are under the direction of Marshall Funeral Home of Waynoka. Kenneth Leroy Wilson, son of the late Walter and Stella Marie “Dolly” (Neff) Wilson was born May 18, 1937, in Wellington, Kansas, and passed away May 12, 2015, at Share Convalescent Home in Alva, Oklahoma, after an extended illness at the age of 77. Kenneth, or “Red”, as he was known to many, served his country in the Navy and then was a barber in Waynoka and Arizona for many years. He also drove a truck and worked in the oilfield. After he moved to Arizona he became a member of the Tombstone Vigilantes and the Boothill Gunslingers He was preceded in death by his father, Walter Wilson; his mother and step-father, Dolly and Claude Woolley; his wife, Dora; a son, Kenneth, Jr.; a daughter, Rosie; a great granddaughter, Lyndsay Clark; older twin brother and sister, Billy Jo and Anna Mae Wilson, and his younger sister, Leona Morris. Kenneth is survived by his daughters, LaDonna Clark and husband, Mark, of Mooreland, and Eva Wilson of Okemah; a son, Chad Wilson and wife, Kelly, of Hardtner, Kansas; his younger brothers, Edward Wilson and wife, Julie, of Seminole, and Richard Wilson and wife, Mary, of Clarion, Pennsylvania;one daughter-in-law, Carol Wilson, of Arizona; numerous grandchildren, great and great great grandchildren, nephews, nieces, other relatives and friends. Memorial contributions may be made through the funeral home to Alva First Assembly of God Youth Group. The family will be gathering at the Waynoka Community Center Thursday before the service.

A graveside memorial service for Kenneth Leroy Wilson, formerly of Waynoka, will be 1:30 p.m. Thursday, May 21, 2015, at the Fair Valley Cemetery, Freedom, Oklahoma. Arrangements are under the direction of Marshall Funeral Home of Waynoka. Kenneth... View Obituary & Service Information

The family of Kenneth Leroy Wilson created this Life Tributes page to make it easy to share your memories.