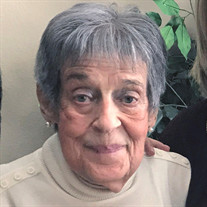 Funeral services for Kermalene Crouch will be 2:00 p.m. Saturday, January 27, 2018, at Marshall Funeral Home Chapel with Reverend Paul Cole officiating. Interment will be in the Alva Municipal Cemetery under the direction of Marshall Funeral Home of Alva. There will be a viewing and visitation for family and friends Friday from 5:00 to 7:00 pm at the funeral home. Kermalene (Quinlan) Crouch was born to Kermit Laverne and Grace Lucille (Campbell) Quinlan on February 18, 1936, on the farm outside of Waynoka, Oklahoma. She passed away January 23, 2018, in Oklahoma City at the age of 81 years. She attended grade school at Mid-Valley and then Waynoka Schools through high school graduation. While in high school, she participated in cheerleading, was the only female vocalist in the swing band which played at local dances and proms, and was voted Football Homecoming Queen. In 1954 she moved to Alva and worked for McClure-Mann Insurance Agency as a secretary for 5 years. This is where she began her training in the insurance business. She married Louis Hoffman on July 8, 1956. She had gone to grade school with him at Mid-Valley and reconnected with him when he came home from the Navy. They moved to Bartlesville, Oklahoma, for a short time where she worked for Thomas Insurance Agency. Then in 1960 they moved back to Alva for the birth of their child, Victoria, in October, 1960. She again worked in the insurance business for Sperry Insurance Agency for many years. After her husband, Louis Ray, passed away from cancer in 1966, she continued to work and care for her daughter as a single mom. Then on May 16, 1968, she married William Crouch and to them was born a son, Michael Crouch, on February 27, 1969. Kermalene loved cooking and gardening. You would often see her sitting on the ground in the yard pulling weeds. Kermalene is survived by her husband, William “Bill” of Alva; her brother, Jack Quinlan of Alva; her daughter, Victoria (Hoffman) Morris of Centerton, Arkansas, her son, Michael Crouch of Alva; her granddaughters, Samantha Morris of Arkansas, and Bridgitte Crouch, of Alva; her grandsons, Wyatt Crouch and Weston Crouch, both of Alva. Also surviving are her step grandchildren, Genna Hackler and Kevin Hackler both of Fayetteville, Arkansas, Jess Hackler of Tulsa, and Caleb Hackler of Oklahoma City; two great grandchildren, Beckam Gottfried and Harper Gurley; her favorite cousin, Patricia Quinlan Noble, of Kiowa, Kansas; other relatives and friends. Kermalene’s sense of humor will be missed by all who knew and loved her. Memorial contributions may be made through the funeral home to the American Cancer Society..

Funeral services for Kermalene Crouch will be 2:00 p.m. Saturday, January 27, 2018, at Marshall Funeral Home Chapel with Reverend Paul Cole officiating. Interment will be in the Alva Municipal Cemetery under the direction of Marshall Funeral... View Obituary & Service Information

The family of Kermalene Crouch created this Life Tributes page to make it easy to share your memories.

Funeral services for Kermalene Crouch will be 2:00 p.m. Saturday,...

Send flowers to the Crouch family.