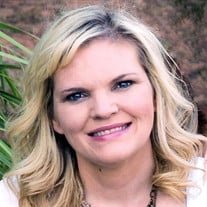 Funeral services for Kimberly Don VanLandingham will be 2:00 p.m. Monday, December 12, 2016, at the Alva First Baptist Church with Dr. Greg Hook officiating. Interment will be in the Sacred Heart Cemetery with Rev. Fr. Bala Sagili Jesudas officiating under the direction of Marshall Funeral Home of Alva. Kimberly Don VanLandingham, daughter of Tom and Debby (Gales) Waddle, was born September 19, 1976, at Larned, Kansas, and passed away December 7, 2016, at Oklahoma City, Oklahoma, at the age of 40 years, 2 months, and 18 days. Kim graduated from Buffalo High School and received her Bachelor’s Degree in Accounting from Oklahoma State University. She then passed the test to become a Certified Public Accountant. Even surpassing these achievements, her most treasured accomplishment was being a mom to her beautiful daughters. On March 13, 2007, she was united in marriage to Michael Alan VanLandingham at Alva. She worked at Kennedy and Coe and for High Plains Bank until 2012. At that time she assumed the role of a full time mom while doing the accounting and bookwork for Mike at Devery Implement. She had been raised a Baptist all of her life, and was currently taking classes to join the Catholic Church. She was very active in the community and all of her kids activities including serving as Treasurer of the Electric Gold Booster Club and Assistant Mother Advisor of the Rainbow Girls. Kim is survived by her husband, Mike, of Alva; her parents, Tom and Debby Waddle of Guthrie, two daughters, Alaina Jane Hurst and Abigail Faith Hurst, both of Alva; five step children, Bentley VanLandingham of Kansas City, Kansas, Saraben Turner and husband, Scott, of Houston, Nicholas VanLandingham of Alva, Devery VanLandingham of Alva, and Chandler VanLandingham of Chicago; one grandchild, Eliza Teddi Turner of Houston; one brother, Tommy Waddle of Guthrie, and one sister, Jennifer Mitchell and husband, Cameron, of Buffalo; other relatives, and many friends. Memorial contributions may be made through the funeral home to the Alva High School Vocal Music Program.

The family of Kimberly Don VanLandingham created this Life Tributes page to make it easy to share your memories.

Funeral services for Kimberly Don VanLandingham will be 2:00...

Send flowers to the VanLandingham family.