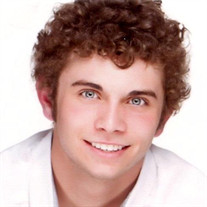 A celebration of life for Kramer Christopher Lewis will be 3:30 p.m. Wednesday, May 4, 2015, at the Alva High School Auditorium with Rev. Paul Cole, pastor of the Town and Country Christian Church and Derrick Thomas, Youth Director at First Baptist Church. Interment will be in the Alva Municipal Cemetery under the direction of Marshall Funeral Home of Alva. Kramer Christopher Lewis, son of Peter Lewis and Tonja (Miller) Lewis, was born July 7, 1995 in Lubbock, Texas. He was baptized at the Town and Country Christian Church on February 6, 2005. Kramer was granted his angel wings on April 30, 2016 in Alva, Oklahoma, at the age of 20 years, 7 months, and 7 days as a result of injuries sustained in a one vehicle accident. He was a beautiful soul with a zest for life, who had a love for his family that exceeded all. A son, brother, grandson, nephew, uncle and cousin, all of which he was proud to be. Kramer’s life would seem too short to many. His never ending smile and stunning blue eyes will be forever embedded in our hearts. Kramer had the ability to make others smile during the toughest times and was a friend to everyone he met. His wit and charm would turn the worst into the best. He had the biggest heart and would give to others even if it meant he would have to go without. Kramer’s favorite verse is “I can do all things through Christ who strengthens me” PHILIPPIANS 4:13. Kramer loved being outdoors in God’s country. He was an avid hunter and fisherman. His secret passion in life was to live on a ranch, driving a tractor, harvesting wheat and fishing at his pond. He also enjoyed riding motorcycles, snowboarding, and being at the lake on the boat with friends and family. During high school Kramer was involved in Goldbug baseball, FFA and FCCLA. For several summers he worked for Tyree Harvesting which helped shape him into a hardworking man. He graduated from Alva High School in 2014. He then attended Northwestern Oklahoma State University. At the time of his death he was working at Garnett Oil Company, serving customers with a smile. He was preceded in death by three grandfathers, Bill Lewis, Bill Miller and Eugene Marcus; one grandmother, Tavey Wagner Lewis; his great grandmothers, Ida Wagner, Agnes Pemberton, and Gracie B. Miller; and great grandfathers Earl Pemberton and William Miller Sr. and his dog Roscoe. Kramer is survived by his parents, Peter and Tonja Lewis; two loving sisters, Kamaree Lewis and fiancé, Christopher Hatfield and Kerstie Lewis; his grandmother, Doris Marcus; and one very special nephew, Torin Olyver Cunningham all of Alva; his faithful companion Nuke and special friend Brianne Cherry of Ponca City; numerous relatives and friends. Memorial contributions may be made through the funeral home to the Town and Country Christian Church Youth.

A celebration of life for Kramer Christopher Lewis will be 3:30 p.m. Wednesday, May 4, 2015, at the Alva High School Auditorium with Rev. Paul Cole, pastor of the Town and Country Christian Church and Derrick Thomas, Youth Director at First... View Obituary & Service Information

The family of Kramer Christopher Lewis created this Life Tributes page to make it easy to share your memories.

A celebration of life for Kramer Christopher Lewis will be 3:30...

Send flowers to the Lewis family.