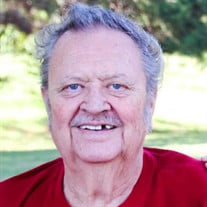 Graveside services for Larry Charles Davidson will be 2:00 p.m. Wednesday, December 16, 2020, at the Waynoka Municipal Cemetery with Rodney Guy officiating. Interment is under the direction of Marshall Funeral Home of Waynoka, LLC. Larry Charles Davidson went to be with the Lord on December 10, 2020, at the age of 72 years and 1 month. He was born on November 10, 1948, in Mooreland, Oklahoma, to Leroy and Bonnie Mae (Miller) Davidson. Larry graduated from Waynoka High School in 1967 and completed the H.C. Lewis School of Electronics program in Oklahoma City the following year. After graduating from the electronic school, he became a signalman for the Santa Fe Railroad. On August 17, 1968, he married Melba Sue Hutchison in Waynoka. After only 8 months of marriage, Larry joined the Navy due to the upcoming draft for the Vietnam War. Not willing to be separated, Melba followed while stationed in Bremerton, Washington and San Diego, California. With an honorable discharge in 1970, he returned to Oklahoma, picking back up with the Santa Fe Railroad where he left off, adding many adventures and friends up and down the track ending in Pampa, Texas. During this time period a family was started with the blessing of two children, Marlana and Michael. In 1979, Larry moved his family back to Oklahoma establishing a homestead on the farm, south of Waynoka. He worked for U.S.P.C.I. (known now as Clean Habors) in almost every department, but mainly as a heavy equipment operator and security until retirement. Larry’s extra time was spent working as a volunteer EMT and Major/Woods County Reserve Sheriff officer, transporting inmates and working event security. After Larry’s stroke 5 years ago, a lot of time was spent in Ark City, Kansas, where he made even more friends. Enjoyable activities included singing to his wife, family, and friends; collecting old cars and antiques; and cartoon artistry. He won multiple blue ribbons with counted cross stitch work. He looked forward to going to all music events and concerts and playing pitch at every family gathering. Larry loved the Lord and spoke to many people and friends about having a relationship with Jesus. He served as a Deacon and song leader at the Northside Church of Christ in Waynoka. He was an amazing husband, dad, and grandpa. He will always be remembered for making the best pancakes in the world according to his grandchildren. Besides his parents, he was preceded in death by his father-in-law, Melbern Hutchison, his brother-in-law, Jeryl Hutchison, and step sister, Betty Jean Shelton. Larry is survived by his wife, Melba; his mother-in-law, Wilma Hutchison who held a closer relationship than any son–in-law could ask for since the loss of his own mother at 17 years old. Their love for each other knew no bounds. Also surviving is daughter, Marlana and husband, Rod Mills and their children, Blake, Ashlynn and Marissa of Ark City, Kansas; son Michael Davidson and wife, Pamala and their children, Sierra, Cheyenne, and Dakota from south of Waynoka; brother and friend, Rex Davidson; nephew, Robert; and niece, Melody; another brother, Don Davidson and wife, Pam; nephew, Ricky Davidson and wife, Salley; and niece Cami Percival and husband, T.J.; step mom, Verna Davidson; and other nephews, Ryan and Jerod Hutchison. Memorial contributions may be made through the funeral home to the Waynoka Fireman’s Fund or the Orion Fire Department.

The family of Larry Charles Davidson created this Life Tributes page to make it easy to share your memories.

Graveside services for Larry Charles Davidson will be 2:00 p.m....

Send flowers to the Davidson family.