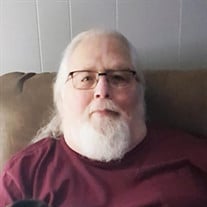 Memorial services for Larry Lawrence “Doc” Glennie and his son, Curtis Wayne Glennie, will be 2:00 pm, Saturday, November 20, 2021, at the Bible Baptist Church with Pastor John Clapp officiating. He was cremated at his request. Larry Lawrence “Doc” Glennie, son of the late Lawrence Elton “Bud” and Naomi Verda (Matthews) Glennie, was born September 18, 1951, at Woodward, Oklahoma, and passed away November 14, 2021, at Tulsa, Oklahoma, at the age of 70 years, 1 month, and 26 days. Doc grew up in Woodward and graduated from Woodward High School. He attended trade schools to become a welder and mechanic. On August 14, 1970, he was united in marriage to Linda Marie Carpenter. They made their home in Woodward where they raised their sons, Curtis and Rod. He worked at Western Farmers Electric Coop, then at Boiling Springs State Park. He worked hard at everything he did. He had to retire early due to a back injury and cancer. Doc loved to fish and ride motorcycles. He was a lifetime member of N.W. 69 Chapter of Abate and did a lot of activities with the Christian Motorcycle Riders. He enjoyed going to coffee with his friends and camping. He enjoyed his collection of guns. He enjoyed helping people fix all kinds of things. He loved tinkering around his shop and working on his motorcycle. He was preceded in death by his parents, Lawrence and Naomi Glennie. Doc is survived by his wife of 51 years, Linda Glennie of Woodward; his sons, Curtis Glennie of Woodward, and Rod Glennie and wife, Christy, of Alva; his grandchildren, Ryan Glennie of Alva, Cris Reed and wife, Shelby, of Alva, Jennifer Reed and fiancé, Dustin Malicoat, of Alva, and Eden Penoyer; his great grandchildren, Brantley Reed, Bently Berry, Emmalee and Jaxon Roberts, and Aaliyah and Lanie Price; one sister Norma Jean Blosser and life partner, Fred Steadman, of Woodward; other relatives and countless friends who he loved dearly. Memorial contributions may be made through the funeral home to the Bible Baptist Church.

Memorial services for Larry Lawrence &#8220;Doc&#8221; Glennie and his son, Curtis Wayne Glennie, will be 2:00 pm, Saturday, November 20, 2021, at the Bible Baptist Church with Pastor John Clapp officiating. He was cremated at his request. Larry... View Obituary & Service Information

Memorial services for Larry Lawrence “Doc” Glennie and his son,...

Send flowers to the Glennie family.