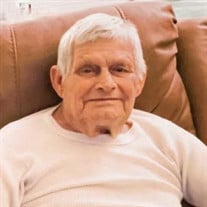 Viewing for Larry Lee Lyon will be Monday, Tuesday, and Wednesday from 10:00 a.m. until 6:00 p.m. at Marshall Funeral Home in Alva. Cremation will follow and a graveside service for the family will be held at Memorial Hill Cemetery Monday, May 11, 2020 with Rev. Andy Ketchum officiating. Larry Lee Lyon was born on December 1, 1940 to Harley Lowell Lyon & Gertrude Marguerite Cox Lyon in Alva, Oklahoma. He grew up with siblings Ronnie, Phil, Karen, Sue, David & Benny. Larry was directed into God’s Kingdom on Saturday, May 2, 2020 following a lengthy sickness battle. He attended high school in Alva and then his family moved to Valley Center, Kansas & then on to Waynoka, Oklahoma where he met Sharon Kay DeVilbiss. They were married on June 3, 1962. To that union, 3 children were born. In their early days of marriage, Larry was employed by Robert R. Brown as a cabinet maker. From there he worked for Bill Baker as a carpenter and finally in 1979, he & Sharon started Larry Lyon Construction Company. He built several houses in Alva & Waynoka throughout his career. In 1974, he built a house in Lake Dallas, Texas for his niece that stretched his building career to the maximum. Not only did he design the house, he single handedly constructed the house in two and a half months and to this day, it is still standing! Larry was a member of the First Baptist Church in Alva and the Moose Lodge. He was preceded in death by both parents, daughter Lana and son Greg, brother Ronnie and sister Karen. Larry is survived by wife Sharon Lyon of 57 years, son Randy Lyon & wife Sonja of Mustang, Oklahoma, grandson Tyson Joachims, granddaughter Shanae Joachims, grandson Gavin Lyon, granddaughter Dylan Lyon, 3 brothers, 1 sister, several nieces, nephews, cousins and many, many friends. Donations can be made to the March of Dimes or Circle of Love Hospice.

Viewing for Larry Lee Lyon will be Monday, Tuesday, and Wednesday from 10:00 a.m. until 6:00 p.m. at Marshall Funeral Home in Alva. Cremation will follow and a graveside service for the family will be held at Memorial Hill Cemetery Monday,... View Obituary & Service Information

The family of Larry Lee Lyon created this Life Tributes page to make it easy to share your memories.

Viewing for Larry Lee Lyon will be Monday, Tuesday, and Wednesday...

Send flowers to the Lyon family.