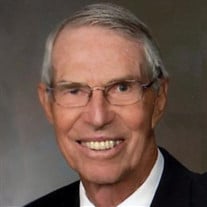 Funeral services for Colin Larry Pearson will be 2:00 p.m. Monday, February 19, 2018, at the Marshall Funeral Chapel Dr. Carol Cook Moore officiating. Interment will be in the Apostolic Christian Cemetery near Burlington under the direction of Marshall Funeral Home of Alva. There will be visitation with the family from 5:00 to 7:00 p.m. Sunday evening. Colin Larry Pearson, son of the late Albert Brant “Hap” and Florence Lela (Haltom) Pearson, was born December 22, 1933, in a farm house south of Alva in Woods County, Oklahoma, and passed away February 14, 2018, at Weatherford, Oklahoma, at the age of 84 years, 2 months, and 22 days. Larry graduated from Alva High School with the Class of 1952. He served in the United States Army, then graduated from Northwestern State College with a degree in Health and Physical Education. He taught for a time in Pawhuska and Anthony, Kansas, teaching History and coaching Gymnastics and Physical Education. He began working for Oklahoma Natural Gas Company in Alva as a Utility Clerk in September of 1962. On December 8, 1962, he was united in marriage to Sonya Kay Allenbach on a beautiful day at her parent’s farm house east of Burlington. In 1969, he was named Assistant District Accounting Manager and was transferred to Enid. In 1977, he was named Area Accounting Manager in Clinton where he worked until his retirement after 31 years of service. He enjoyed hunting and fishing, but he really loved to play golf. He was a member of the Clinton First United Methodist Church, the Kiwanis Club and the United Fund. Besides his parents, he was preceded in death by two siblings, Jeanette Detwiler and Leon Pearson. Larry is survived by his wife, Sonya, of Weatherford; two children, Brock Allen Pearson of Oklahoma City, and Angela Kay Fleming and husband, Ronnie, of Weatherford; one brother Darrell Pearson of Oolagah; four grandchildren, Justin Pearson of Muskogee, and Autumn, Peyton, and Ava Foster of Weatherford; other relatives and many friends. Memorial contributions may be made through the funeral home to the Oklahoma Medical Research Foundation for Alzheimer’s Research.

Funeral services for Colin Larry Pearson will be 2:00 p.m. Monday, February 19, 2018, at the Marshall Funeral Chapel Dr. Carol Cook Moore officiating. Interment will be in the Apostolic Christian Cemetery near Burlington under the direction... View Obituary & Service Information

The family of Larry Pearson created this Life Tributes page to make it easy to share your memories.

Funeral services for Colin Larry Pearson will be 2:00 p.m. Monday,...

Send flowers to the Pearson family.