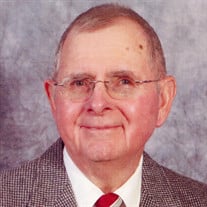 Graveside services for Larry Ray Thorne will be 9:30 a.m. Saturday, April 27, 2019, at the Ellenwood Cemetery near Sawyer, Kansas. A memorial service will be 1:00 p.m. Saturday at the Alva First United Methodist Church with Rev. Dr. Carol Cook Moore officiating. Arrangements are under the direction of Marshall Funeral Home of Alva. Larry Ray Thorne, son of the late Lawrence Raymon and Helen Louise (Young) Thorne, was born July 20, 1943, in Wichita, Kansas, and passed away April 23, 2019, at Pawhuska, Oklahoma, at the age of 75 years, 9 months, and 3 days. Larry graduated from Hunter High School. He then received a Bachelor’s Degree in Library Science at OCU. He moved to Alva and obtained a second Bachelor’s Degree in History at Northwestern. While working at the college library he met Shirley Jo Rose and they were married August 14, 1967, in Alva. He lived his adult life in Alva where he farmed, ranched and was Director of the Alva Library for 44 years. He was a member of the First United Methodist Church, Kiwanis, Friends of the Library, the Genealogy Club and the Monday Night Supper Club. He also was active in the Senior Citizen’s Center and served as President. He volunteered at the Graceful Arts for many of their activities. He loved to travel and collecting Carnival glass. Besides his parents, he was preceded in death by his wife, Shirley; and his sister, Diane “Kay” Lott. Larry is survived by his brother-in-law, Gary Lott and wife, Melanie, of Alva; two nephews, Jason Lott and wife, Kathy, of Sapulpa, and James Lott and wife, Kimberly, of Carmen; and six great nephews, Carson, Conner and Cade Lott, all of Sapulpa, and Brady, Bentley and Gage Lott, all of Carmen; other relatives and many friends. In lieu of flowers, memorial contributions may be made through the funeral home to the Friends of the Library, the Alva First United Methodist Church, the Alva Senior Citizen’s Center, or the NWOSU Foundation. Remembrances may be shared with the family at www.marshallfuneralhomes.com.

The family of Larry Ray Thorne created this Life Tributes page to make it easy to share your memories.

Graveside services for Larry Ray Thorne will be 9:30 a.m. Saturday,...

Send flowers to the Thorne family.