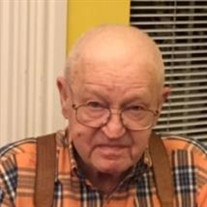 Funeral services for Lavern Camp “Jack” Morris will be 2:00 p.m. Friday, March 31, 2017, at the Waynoka First Baptist Church with Rev. David Shaw officiating. Interment will be in the Waynoka Municipal Cemetery under the direction of Marshall Funeral Home of Waynoka, LLC. Lavern Camp “Jack” Morris, son of the late Lem E. and Lola Pearl (Camp) Morris, was born April 26, 1925, at his parents home in Woods County, Oklahoma, and passed away March 27, 2017, at Alva, Oklahoma, at the age of 91 years, 11 months, and 1 day. Jack attended Walnut Grove School through the eighth grade and graduated from Waynoka High School. He served in the army as a rifle marksman . In 1946 he attended two semesters at OSU. He was a member of the PRCA and RCA traveling to Nebraska, Kansas, Oklahoma, New Mexico, and Texas, where he was very successful in the Professional Rodeo Circuit participating in calf roping and bull dogging for 25 years. On May 28, 1970, he was united in marriage to his high school sweetheart LoEva Kragh at Cherokee, Oklahoma. They made their home on the farm where he was raised southeast of Waynoka. He was a member of the Waynoka Saddle Club and served 25 years on the Board at the 1st State Bank. Coyote hunting with his dogs was one of his favorite hobbies. Jack loved attending events that his grandchildren participated in. Besides his parents, he was preceded in death by his wife, LoEva and her son, John Boils; and one sister, Lola Jean Boyle. Jack is survived by two children, Jane Nickelson and husband, Jerry, of Waynoka and J. D. Morris and wife, Bonny, of Spring, Texas; six grandchilren Heather Kasper and husband, Kris, of Georgetown, Texas, Erika Johns of Manchester, Connecticut, Jack Nickelson and wife, Carmen, of Mooreland, Jana Walker and husband, Wade, of Freedom, Trey Morris of San Antonio, Texas, Travis Morris and wife, Caitlin, of Huntsville, Alabama, and Austin Morris of Spring, Texas; five great grandchildren, Sadie Kasper, Cash Nickelson, Luke Walker, Haley Morris, and Hunter Morris; other relatives and friends. Memorial contributions may be made through the funeral home to the Waynoka First Baptist Church.

Funeral services for Lavern Camp &#8220;Jack&#8221; Morris will be 2:00 p.m. Friday, March 31, 2017, at the Waynoka First Baptist Church with Rev. David Shaw officiating. Interment will be in the Waynoka Municipal Cemetery under the direction... View Obituary & Service Information

The family of Jack Morris created this Life Tributes page to make it easy to share your memories.

Send flowers to the Morris family.