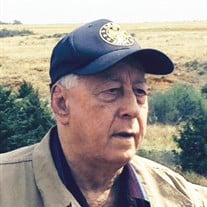 Graveside services for Laverne “Verne” Earl McWithey, 79, will be held 10:30 a.m., Saturday, August 1, 2020, at Alva Municipal Cemetery with rev. Dennis King officiating. Arrangements are under the direction of Marshall Funeral Home, Alva. Verne was born Nov. 17, 1940 in Meade, Kan. to Walter and Leila (Hoskins) McWithey and passed away peacefully July 28, 2020 at the Fairview Fellowship Home in Fairview. At a young age Verne moved with his mother, brother, Gerald Dean and sister, Aldena Faye, to Freedom and then settled in Alva in the early 1950’s where Verne attended Horace Mann Elementary School and graduated from Alva High School in 1959. Verne was drafted at the age of 18 into the United State Army Corps for active duty in the Korean War, but put in for a hardship, to help support his family. He started his first job at the Woods County News, delivering newspapers, immediately after graduating. Four years later at the age of 22 he reported to duty to serve his country. He attended boot camp at Fort Polk, Louisiana, followed by radio school at Fort Gordon, Georgia. He shipped out for Korea from San Francisco, Calif. by way of Alaska and Japan. He served 13 months in Korea, in communications, and then was shipped back to San Francisco by way of Japan and Hawaii. Having a few months left on his contract he was sent to Fort Hood, Texas. After Verne arrived home he continued to serve as an army reserve for the next four years and was honorably discharged May 1969, he also returned to work at the Woods County News for the next 25 years, until it closed due to a fire in 1990. Verne began looking for a job and found Artistic Printing in Fairview was in need of a skilled pressman. There wasn’t anything that Verne couldn’t do or fix and he was a master of everything. Verne retired from Artistic Printing in 2012. When asked what his hobbies were, he said, “I never had time for them”. But did say he enjoyed all the local events in Fairview and Alva, which he often shot video footage from one of the original camcorders you held on your shoulder, He enjoyed everything from The Major County Threshing Bee, Fairview Rodeo Parade, Fairview and Alva Fly-in’s, and NWOSU Homecoming Parade. He is survived by sister-in-law, Sharon McWithey, Tulsa; close friends, Joy Chaney and families, Cleo Springs; Jo and Hoby Hammer and families, Fairview; cousins, Evona Murray, Aline; Ivan Tidwell, Tulsa; Rikki Langley, Kingfisher; Ruth Hays, Judy Abendroth, Betty Hawkins, all of Burlington, Kansas; Victor Hoskins, Arkansas; Randy Hoskins, Plymouth, Indiana; Mary Lou Shidler, Argos, Indiana; Lois Walsh, Platte City, Missouri, and Helen Wright, Towanda, Kansas.

The family of Laverne "Verne" Earl McWithey created this Life Tributes page to make it easy to share your memories.

Send flowers to the McWithey family.