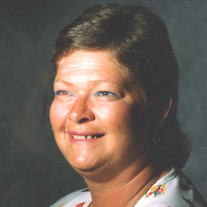 Graveside memorial services for La Vonna Faye Gribble will be 10:00 a.m. Saturday, August 12, 2017, at the Alva Municipal Cemetery under the direction of Marshall Funeral Home of Alva. La Vonna Faye Gribble, daughter of the late Robert William Trekell, Sr. and Faye Elaine (Hada), was born November 24, 1951, Alva, Oklahoma, and passed away July 26, 2017, Alva, Oklahoma, at the age of 65 years, 8 months, and 2 days. La Vonna graduated from Alva High School and also attended Northwestern Oklahoma State University. She lived across the United States, but returned to Alva to take care of family. She was a long time Associate at Walmart, where she enjoyed interacting and visiting with all her customers. La Vonna also enjoyed her grandkids and going fishing. She was also a member of the Friends Church. Besides her parents, she was preceded in death by two brothers, Robert Trekell, Jr. and Kenneth Trekell, Sr. La Vonna is survived by one son, Mike and Michelle Gribble of Alva; one daughter, Misty and Jay Hoover of Alva; one sister, Judy and Ron Kirby of Lawton; eight grandchildren, Marc, Matthew, Jaxon, and Wyatt Gribble, Bobbie Hoover, Casey Hoover and Bethany Reitz, and Jeremiah Hoover; numerous other relatives and friends. Memorial contributions may be made through the funeral home to the Oklahoma Medical Research Foundation for heart research.

The family of LaVonna Faye Gribble created this Life Tributes page to make it easy to share your memories.

Graveside memorial services for La Vonna Faye Gribble will be...

Send flowers to the Gribble family.