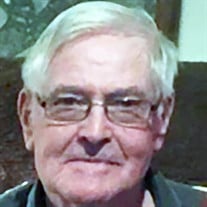 Graveside services for Lawrence "Larry" Thomas Beck will be 10:00 a.m. Saturday, November 7, 2020, at the Manila Cemetery with Tommy Leatherman officiating. Interment is under the direction of Marshall Funeral Home of Waynoka. Lawrence "Larry" Thomas Beck, son of the late Fred and Anna (Peschka) Beck, was born February 9, 1936, in Odin, Kansas, and passed away November 1, 2020, in Alva, Oklahoma, at the age of 84 years, 8 months, and 22 days. Larry grew up in Odin and graduated from Odin High School with the Class of 1954. He served in the United States Army and served one tour in Korea. He moved to Waynoka in 1977 and went to work at Litzenberger Construction as a heavy equipment operator. On February 26, 1983, he was united in marriage to Peggy Herrmann in Waynoka. One of his greatest joys in life was all of his children, grandkids, and great grandkids. He enjoyed woodworking. Besides his parents, he was preceded in death by one brother, Art Beck; three sisters, Dorothy Johnson, Leona Weiser, and Mildred Fitzstephens; and one son-in-law, Bob Bettencourt, Jr. Larry is survived by his wife, Peggy, of Waynoka; two sons, Brad Beck and wife, Brenda, of Waynoka; Shawn Lewis and wife, Brenda, of Ponca City; four daughters, Jolinda Bettencourt of Alva, Shannon Treece and husband, Tommy, of Waynoka, Shelly Collins and husband, Kenny of West Plains, Missouri, and Sharon Shelton and husband, Terry, of Milton, Kansas; 13 grandchildren; 17 great grandchildren; other relatives and friends. Memorial contributions may be made through the funeral home to the Oklahoma Medical Research Foundation.

The family of Lawrence "Larry" Thomas Beck created this Life Tributes page to make it easy to share your memories.

Graveside services for Lawrence &quot;Larry&quot; Thomas Beck will be 10:00...

Send flowers to the Beck family.